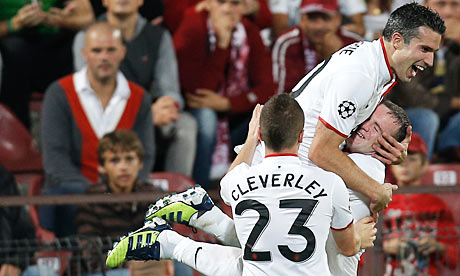 The hosts are in desperate need of a morale-boosting win, while the visitors have lost both games in the competition to date.

Manchester United have had an inconsistent start to the new season, with the English champions failing to live up to their usual billing. The change of manager from Sir Alex Ferguson to countryman David Moyes has taken its toll, with many questioning the Red Devils’ ability to challenge for honours this term.

Domestically United have not hit top form, and their poor home form has come as a source of disdain for the Old Trafford faithful. A 1-1 draw against Southampton on Saturday did nothing to alleviate these pressing issues, and United sit eight in the Premier League with eleven points from eight games.

On the continent, a 4-2 win over Bayer Leverkusen was followed by a 1-1 draw in Donetsk against Shakhtar, and United have the opportunity to all-but book their place in the knockout stages with back-to-back wins over Sociedad.

United were without experienced defensive duo Rio Ferdinand and Nemanja Vidic on Saturday, and it remains to be seen whether they will be reinstated for the clash. Tom Cleverley remains unavailable, meaning that Marouane Fellaini should continue in midfield.

United are clear favourites with Bwin at odds of 1.45 for a victory.

Like their opponents tonight, Sociedad have had a relatively average start to the new season, and are struggling to reach the heady heights of last season’s fourth-placed finish.

The San Sebastian side did get their best result of the season at the weekend however, as they beat Valencia 2-1 at the Mestalla. The win was only Sociedad’s second out of nine La Liga games though, and they currently sit in 12th place on ten points.

The going has been relatively tough in the Champions League also, with Arrasate’s team losing to both Shakhtar Donetsk and Bayer Leverkusen so far. Realistically, Sociedad need something from the game at Old Trafford if they are to have any slender chance of progressing through to the next stages of the tournament.

They have received a boost ahead of the game with influential midfielder Xabi Prieto returning from injury. The under-rated star came off the bench against Valencia but should start against United.

Bwin have Sociedad as outsiders, at odds of 6.00 to get a win.

These two teams have not played against each other in recent times, and as such it will be a case of the unknown for both, especially the hosts.

United have only win five out of their 12 competitive games in all competitions this year, with careless dropped points in the league a specific concern. Their last outing saw David Moyes’ men relinquish a lead to draw 1-1 with Southampton at Old Trafford.

Sociedad’s form is not much better, with the Spaniards only winning four of 13 games in all competitions and only one of their last nine.

United have been struggling of late but should have the required quality to get three important Champions League points here. 2-0 to the English side.