Manchester United have the opportunity to to move into second and close the gap on Chelsea when they face the Premier League leaders in a highly-anticipated match Saturday evening.

The Red Devils are on the league’s second longest active winning streak currently, as their 4-2 win in the Manchester derby last weekend means Louis van Gaal’s side have won six straight.

Cesc Fàbregas’ late strike at QPR last weekend has all but sealed the 2014-15 Premier League title which was important ahead of this match and next weekend’s trip to Arsenal as José Mourinho’s side have not looked so special in 2015.

For a second season running José Mourinho has been blessed on the injury front but Diego Costa’s absence was notable last weekend.

The Spaniard is set to miss most of the remainder of the season with his hamstring injury. Loïc Rémy missed last weekend’s victory at QPR and remains a doubt this weekend. Didier Drogba’s lack of pace really caused Chelsea a problem in stretching the opposition defence and getting in behind them. Chelsea fans will be hoping Rémy is fit to face United.

Jonny Evans continues to serve his suspension and Luke Shaw is a major doubt with a hamstring injury.

Robin van Persie is nearing his return and it all comes down to whether he is match fit or not after a long time out. 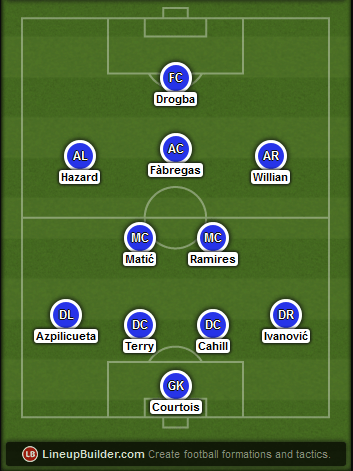 This is one of those games where Mourinho will play two defensive midfielders as opposed to Cesc Fàbregas playing alongside Nemanja Matić. Didier Drogba may be the only striker fit for the Portuguese manager should Loïc Rémy not be ready to make his return. 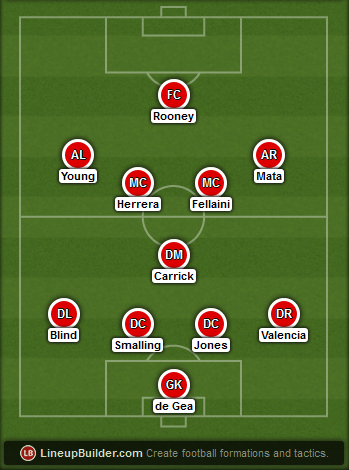 It’s as you were for Manchester United when they thrashing City 4-2 last weekend. Unless Marcos Rojo comes back into the centre of defence. The opening 10 minutes of the game it must be said that the United defence did look lost. Michael Carrick will look to dictate the game in front of the back four again, with Marouane Fellaini offering a physical presence and a good attacking option inside the Chelsea penalty area. All of the attacking players are in good form for the Red Devils lately.

Eden Hazard vs Antonio Valencia
The Belgian forward will be looking to take advantage of Antonio Valencia’s poor positioning and natural instinct of a defender. Chelsea have only scored more than one goal in two of their last seven Premier League matches whilst United have only conceded more than one goal twice in their last 24 Premier League games.

Ander Herrera vs Nemanja Matić
If Manchester United are going to win on Saturday they’re going to need to dominate the midfield. Nemanja Matić, who has been an enforcer for Chelsea this season, hasn’t been at his best recently. Ander Herrera is a player in form so it will be interesting to see if the Spaniard can get the better of the tall Serbian midfielder and get amongst the goals again this weekend.

Juan Mata vs César Azpilicueta
Could Chelsea be haunted by a former player this weekend. Sold 16 months ago from the Blues to Manchester United, Juan Mata has been in great form of late. Playing out on the right, his stronger foot will be when he cuts inside, which will then come up against the strong foot of César Azpilicueta. The Spanish full-back doesn’t allow too many players to get the better of him cutting inside but he’ll have his hands cut out with the passing ability and goalscoring record of United’s playmaker and should be a key battle in the match.

15 – Chelsea have handed Manchester United more Premier League defeats than any other side in the competition’s history.

65 – Manchester United have already picked up more points this season than they did throughout the whole of last (64).

364 – Chelsea’s last home Premier League defeat was on 19 April 2014, versus Sunderland. This game will be played one day short of the one year anniversary of the Blues’ long unbeaten run at Stamford Bridge.