Manchester United have made contact with Benfica over the availability of midfielder Enzo Perez, where Benfica president has made it clear, the club won’t sell the player for anything less than €30m, which is his buy-out clause.

Last week, we reported that David Moyes made a scouting trip to Portugal where to watch Benfica beat Porto 3-1 in the semi-finals of the Taca de Portugal. 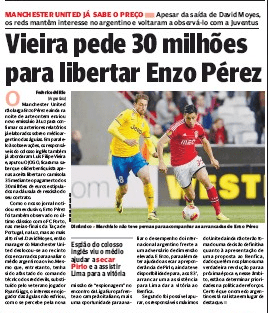 Portugal press O Jogo claimed that Manchester United, who are in need of a central midfielder, were closely following Enzo Perez and that Moyes is reportedly interested in signing him.

The Scot already had positive scout reports on Perez but he wanted to see him in action. Perez is certain to make the Argentinian World Cup squad so United want to wrap up the deal early so his market value doesn’t increase.

Even with Moyes fired, United have retained their interest in the player, and watched him in the match against Juventus on Thursday, where he got the better of Pirlo for the most part. United haven’t yet decided whether or not they will bid Benfica’s asking price to acquire the player but they might do soon.