The transfer situation surrounding Barcelona midfielder Cesc Fabregas is getting interesting with each passing day. After there were rumours that Arsenal were in pole position to resign their former fan favourite, there are reports in Spain that Manchester United are set to bid €37m to secure the services of the 27 year old.

The story which features in Sport claims that new Manchester United manager has advised the Red Devils to bid £ 30 million, nearly €37 m for the former Arsenal star. The story is according with our reports from yesterday, where we relayed that Sky Sports have claimed that the Old Trafford outfit would do everything possible to snap up Fabregas in the summer.

However there a clause in Fabregas’ contract which states that Arsenal would have first refusal for the player and if the London club matches United’s bid for the midfielder, a sensational return to the Emirates would be possible.

The Gunners’ manager Arsene Wenger had a soft spot for his former captain, but it would be interesting to see if the Frenchman brings in another midfielder given his plethora of options in the middle of the park.  Former Arsenbal Legend Ray Parlour had also earlier advised Wenger against bringing the Spaniard to the Emirates.

Manchester United though have been relentless in their pursuit for Fabregas, whose career now looks set to be away from Camp Nou after the Catalan club’s President Josep Maria Bartomeu had earlier made it clear that there will be wholesale changes at Camp Nou in the summer. 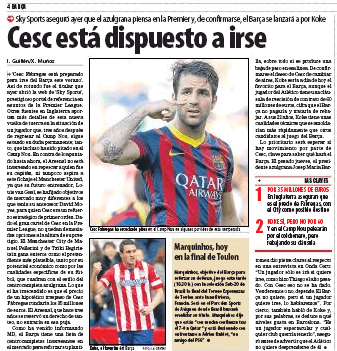 Spanish newspaper Mundo Deportivo however reports that Arsenal aren’t interested in him reportedly and neither are Man United, who have set different transfer targets this season with Louis van Gaal. Manchester City could emerge as the most likely destination in case he does return to the Premier League.

Can the Red Devils finally lay their hands on the player they have been seeking since last summer or will Wenger bring back yet another midfielder to Arsenal? Surely time will have an apt answer.