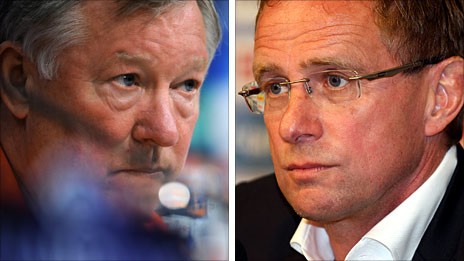 SCHALKE ARE AT THEIR BEST WHEN COUNTER-ATTACKING

Castrol EDGE Performance shows that Shalke 04 have had on average just 44% of possession in their impressive Champions League campaign this season, compared to 52% this term in the German Bundesliga, where they are currently struggling in 10th position.

Schalke’s poor form in the Bundesliga cost Felix Magath his job as manager, despite having qualified for the Champions League quarter finals.

New boss Ralf Rangnick has managed to take his side to the last four thanks to an impressive display over the two legs against Inter Milan, where his side scored seven goals despite registering less than 47% of possession in both games.

Schalke 04 have relinquished possession of the ball in eight of their 10 Champions League games this season, however, they have lost only once (v Lyon on match day one).

Their highest possession ratio in a Champions League match this term was 51%, at home against Benfica.

Occupying a free role on the pitch, the Welsh veteran has been instrumental in Manchester United’s Champions League quarter final tie against Chelsea, assisting all three of his side’s goals, the left-footed wizard had also assisted United’s last goal against Marseille in the last 16 stage. 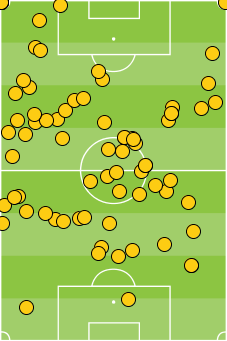 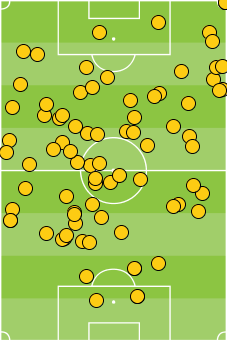 Ryan Giggs’ touch graphics above illustrate his free role on the pitch, covering both wings and the centre of the park, making it difficult for opposition defenders to man-mark him.