Louis van Gaal made an interesting comment few days back. The Manchester United manager joked that it seems like he would sign every single player on earth, if the media reports are to be believed.

The Dutchman also discussed about the complexity of a transfer deal to take place, and that not every player wants to join the club.

English media have extensively reported that Van Gaal would be given a massive transfer war-chest to bring in quality players next summer. United have qualified for the Champions League which should be an added incentive to attract world class players in the team.

There are strong reports that United want to sign Gareth Bale, while there are also suggestions that the club should buy a world class striker next season. Critics have even argued whether a dynamic box-to-box midfielder is a top priority for the club.

In the past few days, Catalan press have covered extensive stories on Juventus midfielder Paul Pogba with great interest. Barcelona are currently under a transfer ban but there is a growing feeling that would be lifted in the summer.

The French midfielder has won three league titles with Juventus and may win the Champions League this season as well, as the Old Lady facing Barcelona in the final on June 6, 2015. There are suggestions that he could move elsewhere to test himself at other leagues, and he has no shortage of admirers. 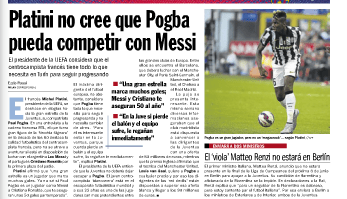 Barcelona have been a long term admirer of Pogba, and recent reports suggest, the club have made contact with the Turin giants over the possibility of signing the highly rated French midfielder.

Catalan newspaper Sport says Barcelona could face a strong competition from Manchester United, who are equally keen to re-sign their former player at all cost. United are prepared to spend as high as €90m for his signature. Jamie Jackson of The Guardian recently wrote an article where he claimed signing Pogba is United’s first priority next season.

Pogba has grown into a world class midfielder since he left Old Trafford three years back. It is natural that Juventus would try to get the best possible deal for him, should he leave the club in the summer and therefore would demand anything between €75-90m for the midfielder.

United have the funds to meet his asking price, no doubt, but Van Gaal needs to spend the money wisely. Instead of spending big money on one single player, United would do well to spread the money across all areas of the pitch.