Marcos Rojo made a big impression during the World Cup in Brazil for Argentina. He was one of the most consistent performers for Argentina along with Lionel Messi and as a natural consequence, got linked with several European heavy weights.

Liverpool were heavily linked with a move for Rojo for a good past three-four months. The Reds were looking for an alternatives elsewhere, after Alberto Moreno deal had hit a snag, and found Rojo as the candidate to fill the left-back role. Liverpool scouts had been following him since the turn of this year but Sporting wanted to do any business only after the World Cup, as they felt the player’s value will increase, should he perform well.

However, Liverpool’s interest died down all of a sudden possibly due to the fact that they felt a deal for Moreno could still be possible. That has left the door ajar for Manchester United to register an interest and might snap him up as well.

When Rojo joined Sporting, he had a €30m buy-out clause, but now could be available for €20m only. He has a contract till 2017 and Sporting could be willing to do a business here. Rojo has remained tight lipped about his future but is dropping some hints recently after he followed few Manchester United players on Instagram. 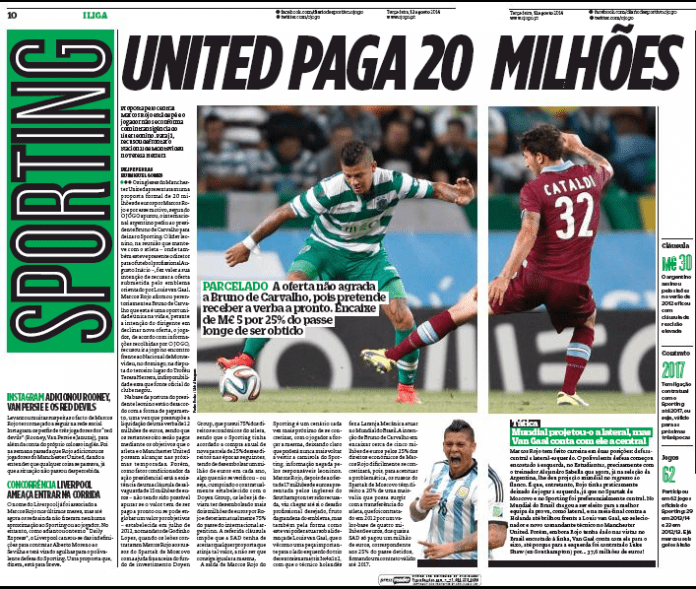 O Jogo now claim that Rojo has asked Sporting to let him leave this summer and even has refused to play a friendly against National Montevideo.

Manchester United have made a €20m offer for him, but the problem is United’s offer is split into €12m upfront plus €8m bonuses depending on performance. Sporting want €20m outright and they have a strong reason for that. They have previously refused a €17m offer from Southampton and is likely to reject United’s offer as well. Sporting only own 25% of Rojo’s economic rights, the remaining 75% belonging to the Doyen group, so they would get only €4-5m if they sell him at one go. However, 25% of €12m would fetch them a very little profit or nothing at all.

Also apparently something that might undermine Sporting is that under the previous Sporting president a clause was inserted whereby Sporting would be forced to sell him at €15m, though it was not made clear whether it meant an outright €15m or including fees per objectives.

Manchester United need a left-back/centre-back (O Jogo claim Louis van Gaal want to use Rojo as a centre-back) in the summer and therefore could make a move for Rojo (can play as a centre-back but mainly a good wing-back), but they must pay the full fee as Sporting probably won’t entertain any other alternative break down payments.