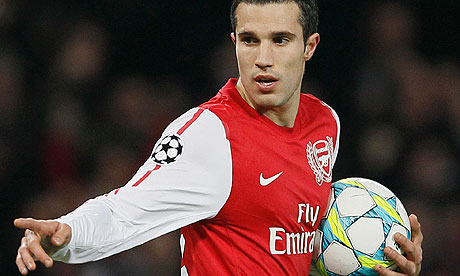 With the Premier League season set to start this weekend, the transfer window has ensured that the battle for top spot is set to be as tightly contested as ever. Manchester City are the team to beat after claiming a last-gasp goal difference title in 2011-12, but cross-town rivals Manchester United have put a marker down this summer.

There is no bigger statement of intent than signing Arsenal captain and current PFA Player of the Year Robin van Persie. The Netherlands international is set to join the Red Devils for a fee believed to be 24 million, despite interest from City and Juventus.

Arsenal manager Arsene Wenger and the Emirates faithful will not enjoy watching their once-talisman stepping out at Old Trafford this term, and the fact that a deal has been negotiated is a credit to United’s persistence. Sir Alex Ferguson has intervened to ensure that a deal could happen, whilst United have obviously convinced Van Persie that his future lies with them rather than the current Premier League champions.

The solitary signing of Jack Rodwell to date this summer has been something of a surprise given City’s usual exuberance and tendency to spend in the transfer window. Roberto Mancini has become frustrated by the club chiefs having to tighten the purse strings due to the Fifa Fairplay Regulations, and although the Italian has a star-studded squad at his disposal, Van Persie’s addition was certainly on the coach’s wishlist.

United on the other hand have counteracted City’s prudence with bullishness. The capture of Shinji Kagawa from Borussia Dortmund will give the Red Devils’ attack energy, dynamism and a different threat, whilst a strike partnership of Van Persie and Wayne Rooney seems too good to be true. The Dutch maestro’s signing will take some of the goalscoring responsibility away from Rooney, who they have over-relied on at times in the recent past.

Although United missed out on Lucas Moura, their attempts to sign the Brazilian and the amount of money they were ready to splurge before Paris Saint-Germain intervened again shows that United are hungry for revenge and to prove they are the number one team in the country once more.

City are used to having their pick of players given the financially assurance of their owners, but United have matched them and more over the last two months. The Red Devils are ready to make Van Persie the joint highest earner at the club, refusing to be bullied by the wealth of their cross-town rivals.

United have also beat City to the signing of Chilean teenage sensation Angelo Henriquez, who is set to move to Old Trafford after passing a medical. It is believed that the Etihad Stadium side tried to intervene in the 11th hour and snatch him away from Ferguson’s grasp, but the player opted for red over blue.

City will be just as good as they were last season, and better, given that they are growing and working together as a squad and their team will be much the same as the one that won the title in 2011-12. However, with Nemanja Vidic fit again and United bolstering their attacking options with Kagawa and Van Persie, the Citizens are set to be pushed all the way if they are to retain their crown.

To see the new signings in action over the course of the season, click here for Manchester United Hospitality packages.