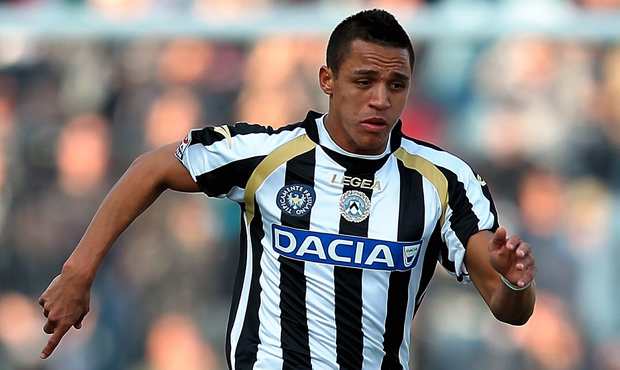 It seemed a foregone conclusion this time last week that Alexis Sanchez would be ending his fairytale stay at Udinese to seek pastures new in Catalonia with European Champions Barcelona. However, reports emanating today from various British outlets claim that Manchester United have entered the fray to sign the multi-talented Chilean international

Although there were indications a deal was in place with Barcelona, Bianconeri President Franco Soldati poured cold water on such talk.

“With regards to the statements attributed to be about a supposed transfer of Sanchez to FC Barcelona, I wish to point out these are without foundation.” he told the club’s official club website.

“There is no agreement between Udinese and Barcelona for the sale of this player. It should also be noted no meetings are planned between the two clubs to discuss any such transfer.”

There is no denying there is concrete interest from Pep Guardiola’s side, but with heels being dragged it may work in the favour of not only Manchester United but also that of their local rivals Manchester City who are also keeping tabs on the 22-year old.

Sanchez excelled in Serie A last season, playing a monumental role in the club’s Champions League qualification. He is seemingly spoilt for choice and it is no secret Red Devils manager Sir Alex Ferguson is a keen admirer – having kept tabs on him during last summer’s FIFA World Cup.

The tournament in South Africa ended up being a springboard for Sanchez to leap off to dizzy heights as his performances for Chile aided their progression to the last-sixteen – only to be humbled by The Samba Boys of Brazil.

Former Milan Coach Arrigo Sacchi has lavished praise on the little South American, describing him as a phenomenon.

“Sanchez is a real phenomenon. He would not only do a great job with (Pep) Guardiola at Barcelona, but he would be of added value to any other team.”

Ironically the Rossoneri’s city rivals Internazionale are also reportedly interested but it’s the trio of the two Manchester clubs and Barcelona who are doing the bartering. Eastlands chief executive Gary Cook has been in dialogue with Udinese, as too his opposite number at Old Trafford David Gill who is believed to have met Soldati’s son Gino Pozzo in Barcelona regarding the potential transfer. A fee in the excess of £25m looks the likely estimate to prise the player away from Zebrette.

Nevertheless Sanchez’s future is still up in the air but there is no doubt he is one of the most sought after properties in Europe. His employer Soldati still remains optimistic that he will be successful in denying potential suitors and see his star man adorn the black and white stripes next season.

“Despite everyone wanting him, I have confidence in the possibilities that he will continue to wear the Udinese colours next season. Especially considering the current negotiations.

“If indeed an irrefutable offer does not arrive, it means that the big clubs are not convinced of the quality of the striker and they are therefore not ready to value him as he deserves.

“Hence, it would be better for the player to remain in Friuli another season and end the maturity process that he began three years ago. It would be good for him and for us.”

Despite his optimism it will be interesting to see how this develops in the coming weeks with a move looking inevitable.