Manchester United have the upper hand in the race to sign highly rated Benfica midfielder Enzo Perez, according to reports from Portuguese newspaper O Jogo.

The Red Devils are waiting for Argentina’s call-ups before making a move for Perez. The reason for that is that it’d be very difficult for the player to obtain a work permit in the United Kingdom, given how few international matches he has played and a call-up for the World Cup would make it far easier. 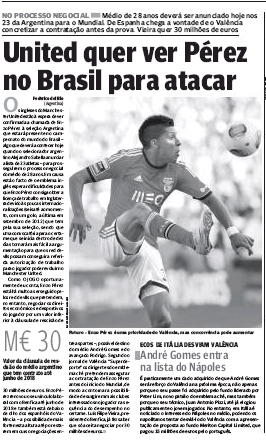 United want to negotiate for a fee below the €30m of the player’s buyout clause but Benfica’s president has vowed not to let the player go for any less than that.

Valencia are thought to be in pole position to land the midfielder. The situation is now weird. It’s about how Valencia are in a hurry to wrap up the Perez deal, but it’s difficult for them because Peter Lim’s (the new owner of Valencia) deal with Bankia isn’t completed yet and without his money, Los Che can’t compete in the market.

As a non-UE player, Valencia want to sign him asap since if he gets a World Cup call it will allow Manchester United to go for him as he’d easily get a working license in the UK.