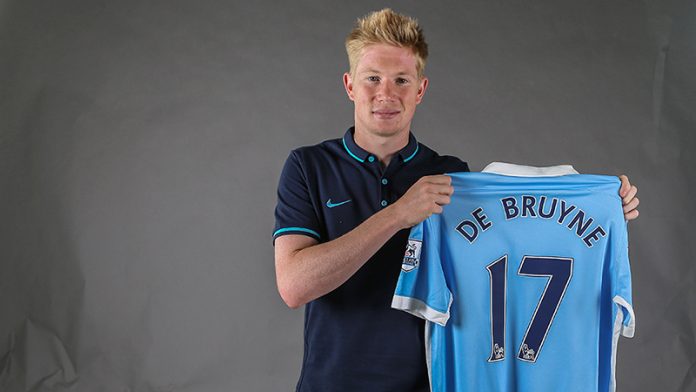 In terms of net spending, Premier League clubs seem to have done well in balancing their books. But what about other major teams in Europe? A comprehensive study has revealed that whilst some clubs have pushed on again with heavy spending – Manchester City and PSG are top of the ‘net spend table’ – almost half the clubs (15 out of 32 clubs) involved in the group stages of the Champions League have negative net spend figures (including the January transfer window) to their names in 2015 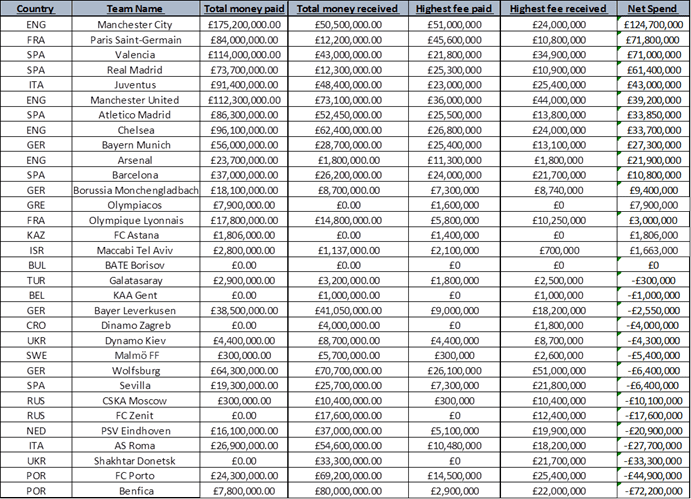 Many top teams in Europe had to curb their spending due to Financial Fair Play regulations, for instance, clubs such as Zenit St. Petersburg and Galatasaray being unable to flex their financial muscle in 2015 despite spending significantly in previous seasons.

Manchester City are way out ahead with regard to money spent in 2015, spending £175m on new signings, including the £51m signing of Wolfsburg’s Kevin De Bruyne and the £44m acquisition of England international Raheem Sterling. They have also acquired Fabian Delph, Nicolas Otamendi and Wilfried Bony this year and whilst they have recouped just over £50m by selling players their net spend is the highest in Europe at £124.7 million.

City’s neighbours Manchester United are also one of the competition’s biggest spenders in 2015 as Louis Van Gaal remained busy in trying to sculpt the squad to his own taste. While the club signed quality players like Bastian Schweinsteiger, Morgan Schneiderlin and Matteo Darmian, it is their deadline day signing of 19-year-old Anthony Martial for £36m that raised eyebrows. However, United were able to recoup just over £73 million on players in the two 2015 transfer windows (Angel di Maria being sold to PSG) and were second to Benfica in terms of total money received from transfers.

From that respect, Chelsea have had a relatively quiet transfer window. The Blues have shipped out 32 players on loan, while Pedro Rodriguez remains their only big money signing this summer. While Chelsea would have loved to add one or two players, especially in defence, but with a net spend of over £33m, there’s hardly any room for complain.

City are one of six teams in the Champions League to break their transfer record in 2015 along with Wolfsburg, Porto, Valencia, Maccabi Tel Aviv and FC Astana.

Like City, PSG have also highlighted their confidence in avoiding further FFP punishment with a net spend of £71.8 million in 2015, as they too aim to achieve European success on the back of their domestic progress.

Juventus have added several top forwards in the side such as Paulo Dybala and Mario Mandzukic, but the Bianconeri still maintained a £43m net spend, with the departures of Arturo Vidal, Andrea Pirlo and Carlos Tevez. Serie A title challengers AS Roma have been penalised by UEFA over FFP and their net spend of minus £27.7m reflects this. The Giallorossi did a commendable job though by adding players like Edin Dzeko and Mohammed Salah in the summer.

Meanwhile, Portuguese teams Benfica and FC Porto continue to develop highly talented footballers from both their homeland and South America and sell them on to elite European clubs for large fees. They struggle to reinvest that money in their squads as they are unable to attract the highest calibre players who head to the higher profile leagues.

In Spain, Real Madrid and Valencia have spent heavily on transfers, and both have managed a healthy net spend figures, though Los Blancos have not spent as heavily as in previous years. Despite being under a transfer embargo, Barcelona have a total net spend of £10.8 million due the acquisitions of Arda Turan and Aleix Vidal and the departure of versatile forward Pedro. The Catalan club fell well behind the biggest spenders in Spain, Valencia, who have a total net spend of £71.8 million in 2015 as they look to make ground in Europe again, having overcome financial difficulties in recent years.

FC Astana and Maccabi Tel Aviv are the only participants outside of UEFA’s top six ranked leagues to have a positive net spend in 2015.

The Champions League is club football’s elite competition so it’s no surprise that some of the world’s biggest teams are continuing to flex their muscles in the transfer market as they strive for European glory. For Manchester City and PSG the Champions League trophy is certainly the next step if they are to be regarded as two of the world’s biggest clubs and the net spend figures show they are certainly going for it.

The other side of the coin tells a bleak story. Clubs with a negative spend will face difficulties in bolstering their squad in the coming transfer windows. The riches are merely putting a glossy coating over the transfer crisis pervading in Europe.

Note: All data was verified across multiple sources including BBC, Guardian, Sky Sports, Transfermarkt and Soccerway. Special thanks to Richard of Ticketbis for helping me out.