It seems like no body has any clue about what’s going on with the Angel di Maria saga.

Madrid press believe that Carlo Ancelotti wants to keep Di Maria with him as he was one of the outstanding players of last season.

Sergio Ramos has also commented on Di Maria’s future insisting the Argentine probably would continue his career at the Bernabeu.

Ancelotti recently however hinted that Di Maria could be sold should any potential buyer comes up with a mega offer. 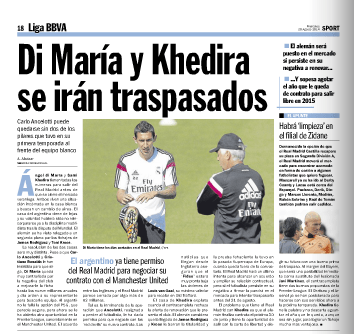 In France, they think Di Maria is PSG bound, but the press is also aware that the French champions must sell some of their players to balance the book.

Which means Manchester United have an upper hand in luring him. Money is not a factor for United, but the question is – can they wrap up a deal before the transfer deadline day?

According to reports from Catalan newspaper Sport, Manchester United seems to have agreed a €62m deal to land Angel di Maria and that the player has been given a green signal to discuss personal terms with the Premier League giants.

On that note, let me say, there is nothing on this story in AS, Marca and El Confidencial – the newspapers having close association with Madrid.

The report also claim that Real Madrid are likely to sell Sami Khedira as well should he refuse to sign a new contract.