Manchester United have agreed a deal in principle to appoint Jose Mourinho as their manager.

The Portuguese manager was out of a job after being sacked by Chelsea towards the end of 2015. He will now take charge at Old Trafford.

Louis Van Gaal guided Manchester United to a FA Cup win yesterday night, but clearly that was not enough. The Dutchman has spent a lot of money over the last couple of seasons and has failed to challenge for the title.

United have also failed to finish in top four this season.

BBC are reporting that a deal is agreed in principle and the formalities should be completed soon.

The confirmation should come early next week according to the report. BBC also add that Manchester United initiated talks with Mourinho back in February.

However, senior figures at Old Trafford were unsure of the appointment and Woodward wanted Van Gaal to see out his contract. United missing out on a top four finish has clearly had an effect on the managerial decision.

Mourinho has always voiced his admiration for Manchester United and it seems that he will finally get the job he always wanted. The Portuguese was expected to replace Sir Alex, but he had already accepted the Chelsea job back then. 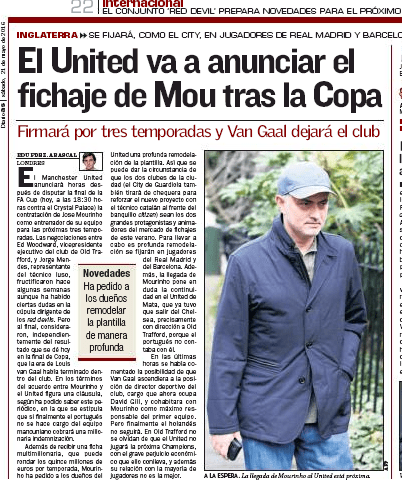 Meanwhile the Spanish also press also reported that talks between Jorge Mendes and Ed Woodward went well and the Portuguese should be confirmed as the manager of Manchester United soon.

Jose Mourinho is a world class manager and is perhaps second only to Pep Guardiola right now. The Portuguese manager will be a stunning appointment for Manchester United as the Red Devils aim to get back to the top of English football.