The Premier League fixtures for 2015-16 season has been released and Manchester United will take on Tottenham Hotspur in the opening fixture at Old Trafford on August 8.

Louis van Gaal started his first match as United manager with a 2-1 defeat to Swansea City at Old Trafford last season. The Dutchman has been insisting that his side cannot suffer another defeat in the first game of the new season.

#mufc’s 2015/16 @PremierLeague fixtures (all dates are subject to change). pic.twitter.com/Unt1fzghJE

The 20-times English champions have been heavily linked with the North London club’s star striker Harry Kane. The England international scored 30 plus goals for the White Hart Lane in all competitions in the previous campaign.

It should be seen whether Kane will be a part of the home team or the visitors when United face Tottenham in the first fixture.

United face Liverpool at home on September 12. In October, they face travel to London and Merseyside as they face Arsenal and Everton, while host Manchester City in the derby on October 24. The Red Devils finish their last game at home against AFC Bournemouth on May 15.

The detailed list of fixtures are given below: (All dates are subjected to changes) 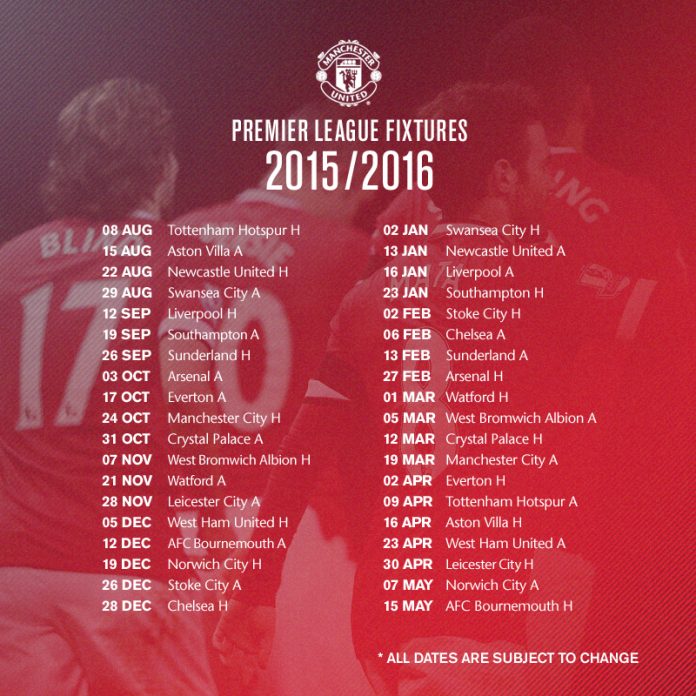