Manchester United and West Ham engaged in a goalless draw at Old Trafford. The hosts enjoyed most of the possession without creating many clear goalscoring chances. For West Ham, this will definitely be a point gained. Bilic has masterminded wins over Manchester City, Chelsea, Liverpool, Arsenal so a point at Old Trafford will ensure they’re undefeated against these sides this season (so far).

The result saw Manchester United dropping to the fourth place while West Ham now sit in the sixth place (for now, since Liverpool, Everton and Crystal Palace have a game in hand).

The home side failed to break down a resolute West Ham defence led by Winston Reid who was absolutely brilliant, but we will get to that later. Louis van Gaal has shown a preference for a patient build-up but his style of play at United, whatever you may call it, has now resulted in five goalless draws in the club’s last nine games (in all competitions).

“Attack, attack, attack,” was the cry of the Stretford End. When the final whistle was blown, you could hear some boos from the fans. Strangely enough, this has been one of the more entertaining games Manchester United have played recently. Then again, for large parts of the game, West Ham contributed more in attack. In fact, the home side had to wait until the 60th minute for their first shot on target.

United still sit in the fourth and are just three points off the top, so one might wonder if the fans are overreacting. However, with rivals and neighbors Manchester City slipping to a 2-0 loss to Stoke, fans hoped that van Gaal’s side would be able to capitalize on the situation.

Time for Memphis to be reinstated in the first 11?

Memphis’ introduction in the late minutes of the second half surely made a difference for the home side as he injected some positivity in the side. The youngster set up Anthony Martial in the 80th minute. The Frenchman’s strike from the delicious pass narrowly missed the goal.

The Dutchman has been playing the bench role for a few weeks now. Given the lack of attacking threat in the team – especially with Juan Mata fizzling out – could it be time for the former PSV player to be starting games now?

Winston Reid with a man of the match performance 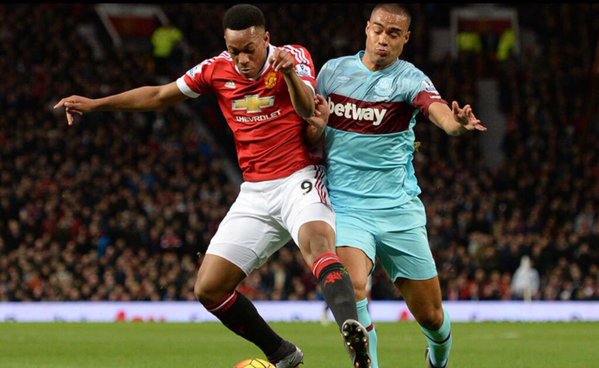 Despite West Ham coming close a few times, especially with that Zarate effort in the second half, it was the defensive performance of the visitors that was most impressive. Winston Reid and Angelo Ogbonna formed an impressive central partnership with both players making seven clearances in the match. The clean-sheet would be encouraging for Slaven Bilic as West Ham had gone nine games without one. Reid also came close to getting his name on the scoresheet but his headed effort met David de Gea’s post. Reid’s 150th appearance for West Ham last week was ruined by an own goal, but his 151st appearance will be something he cherishes for a while.