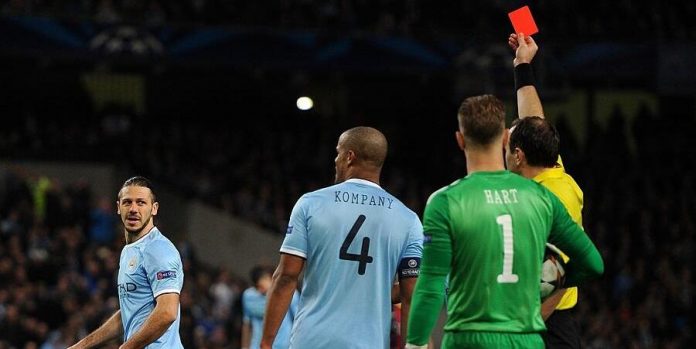 Manchester City were beaten 2-0 by Spanish giants Barcelona tonight at the Etihad , with goals from Lionel Messi and Dani Alves all but securing the Catalan side’s progression to the quarter finals of the Champions League.

The match hinged on a hugely contentious penalty decision given against City early in the second half. Leo Messi was clean through on goal, albeit slightly to the right of the box, and Martin Demichelis took the gamble of trying to sweep his leg around the his compatriot, and save the day for City.

The veteran defender clearly mistimed his challenge, and brought the Barca star down illegally, but was it in the box?

Demichelis was given his marching orders, and the penalty was clinically dispatched by Messi.

To City’s credit, the match did not become a training event for Barca, as was expected. Pellegrini’s side battled hard, and substitute Dzeko had a particularly decent last 20 minutes, terrorising Gerard Pique and Javier Mascherano, while David Silva’s passing was magnificent at times.

But try as they might, Barca dealt the killer blow through Dani Alves, right on the 90, with City now facing an practical insurmountable task at the Nou Camp on March 12th.

Twitter has reacted strongly to the penalty descision that gave the impetus to Barca, and while there can be little objection as to Demichelis’ dismissal, many insist that the ball was clearly outside the box.

Only thing is…that occurred just outside the area, and Messi fell down in the area. Should have been a red, but not a straight penalty.

Not a penalty, since when barca needed these kind of things to score goals ?! — Ziad Takkoush (@ziad_tak) February 18, 2014

The Barca score was flattering, definitely not a penalty and definitely a deserved draw for City — – (@elliotofcourse) February 18, 2014

Should Barcelona have been awarded the penalty?

What do you think? Was it a penalty? Can City get back into this tie? Let me know in the comments below…