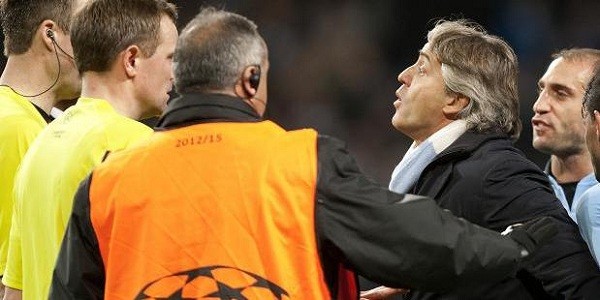 Manchester City manager Roberto Mancini won’t be facing a touchline ban for confronting the referees after their 2-2 draw with Ajax in the Champions League.

Manchester City’s dream of qualifying for the knockout stages suffered a massive blow as they drew with Ajax last night. In order to qualify, City will now have to win both of their remaining matches and hope that results elsewhere go their way.

Within 17 minutes of the match, Ajax raced to a 2-0 lead at the Etihad stadium thanks to a brace from Siem de-jong. In the second half, City came out with much more purpose and restored parity with goals from Yaya Toure and Sergio Aguero. But the match ended in a controversy as City’s third goal in the match was disallowed after Sergio Aguero was judged to be in an offside position. Television replay proved that it was a wrong decision.

Roberto Mancini was furious with the officials and confronted them at the end of the match. The Manchester City manager also vented his frustration on a cameraman who followed him on to the pitch. Later on Mancini criticized the match officials for their ‘poor’ decisions in his post match interview.

“Unfortunately we took only one point and now I think it is finished for the Champions League.” – conceded Mancini.

“It was a goal. The referee and his staff were really poor. I said to the referee ‘congratulations – it was a goal’.

“I’m not the first or the last [to speak to the referee]. In football it can happen.”

Mancini also explained his face-off the the cameraman saying –

“The cameraman went to film me and he followed me off the pitch.

“It is not a film about me, it is the game. I told him it was finished.”

Arsenal manager Arsene Wenger received a touchline ban for a similar incident when he confronted the referees after their match against Barcelona in 2011. But according to reports in Telegraph, UEFA has confirmed that Mancini won’t face any disciplinary actions as Danish official Rasmussen has not mentioned this incident in his match report.

Roberto Mancini was also disappointed with his team’s defense after they conceded two early goals, which put them on their back foot straight away.

“I think we scored three goals but the problem was we conceded two stupid goals from corners,” said Mancini.

“You can’t concede two goals from corners in a game like this.

“We had many chances to score today, but probably this is not our moment in the Champions League. Perhaps Borussia Dortmund and Real Madrid are better than us, maybe Ajax also.” – Mancini added.

The City manager has also joked about his team’s chances of qualifying to the knockout rounds. City will now need to win their two remaining matches and Mancini has said that if they manage to do so, they might very well win the Champions League this year!

Following City’s dismal performances in Europe there has been lot of speculations about Mancini’s future at the club. It would be interesting to see Manchester City owner Sheikh Mansour’s reactions if City departs from group stages of the Champions League once again.