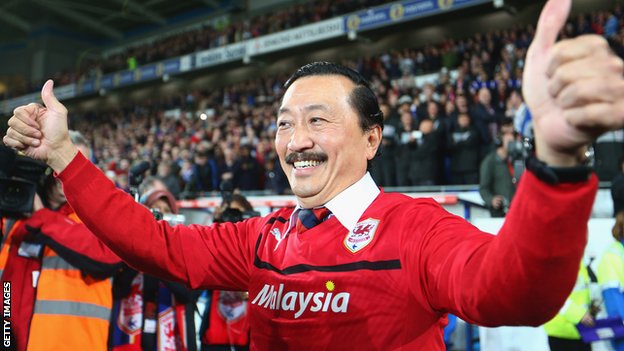 So, the Bluebirds of Cardiff are blue again. Cardiff City owner Vincent Tan had a rethink over the Christmas break and, following discussions with supporters, agreed to switch the club’s home shirt back to blue – a colour it last was two and a half years ago. Cardiff City fans will have been thrilled as their team walked out in blue against Fulham last Saturday, having made a lot of disgruntled noises since Tan’s arrival and subsequent rebranding exercise.

Tan made the initial switch to a red home shirt in an effort to promote the club as a global commercial entity. “What do people think of when they think of Wales?”, you can imagine the marketing team asking themselves. “Dragons and the colour red”, being the obvious reply. (I also think of John Toshack’s moustache and pints of Brain’s IPA, but that’s probably just me.)

What Tan failed to appreciate – and he is by no means the only owner guilty of this – is that the identity of a football club can run deep. Blue may have seemed like just a colour, but then Tan wasn’t getting Cardiff City shirts for his eighth birthday. Even if he was, that’s no guarantee, as owner-fans get it wrong too; Mike Ashley was never going to get Newcastle fans to call St James’s Park the ‘Sports Direct Arena’.

Vincent Tan has now said he is open to the idea of having an elected fan representative on Cardiff’s board, a step the Cardiff City Supporters’ Trust has been pushing for. 14 Football League clubs have some degree of fan ownership, although Swansea are the only Premier League team on that list – with their supporters’ trust owning 20 per cent of the club.

Fan-ownership is a model that’s worked in Europe, and one that the Labour party have suggested ahead of May’s General Election that they’d support in this country. Barcelona and Real Madrid are both owned by supporters, with an elected president putting in the cash that makes them the Champions League powerhouses they are. In Germany, where I think we can agree that Bayern Munich (82 per cent fan-owned) have been doing alright for themselves lately, only an association or club can hold the majority ownership of a team. Champions League wins and season ticket prices a fraction of those here in England – not bad.

In the early 1960s, Don Revie’s Leeds United borrowed Real Madrid’s all white kit to try to mimic their success. By 1975, they had two First Division titles, an FA Cup and had been to a European Cup final. Perhaps it’s time we looked to Spain again, but this time borrowed Real’s business model instead…don’t go changing any kits, Vince.