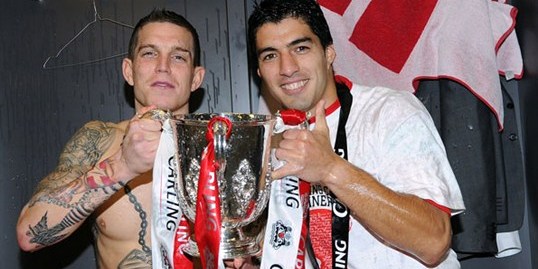 Liverpool defender Daniel Agger could be open to a move to Barcelona, according to his agent, casting fresh doubts over his future at Anfield.

Having failed to land David Luiz of Chelsea, the Catalan giants have shifted their target to the Denmark skipper and has had €17m (£14.6m) offer rejected by the Reds. It is understood that Barcelona will step up the chase with a higher bid in coming days.

The 28-year-old is the second longest serving player in the club at the moment and has been rightly honoured with a vice-captaincy role, following the retirement of club-legend Jamie Carragher.

“We are aware that Barcelona have made an offer for Daniel that Liverpool have rejected,” said Per Steffensen, agent of Agger.

“Daniel has a contract with Liverpool for the next three years and it would be up to the clubs to agree a fee for his transfer in order for that to change.”

With Carragher no longer in the picture, Sebastian Coates failing to convince properly and Martin Skrtel’s future in doubt too, though he is informed that he won’t be sold, and only Kolo Toure (32) been signed on a free transfer; Liverpool need a leader from the back to marshal the defence and hence the Anfield club can ill-afford to lose their influential ball-playing defender.

Agger has been a loyal servant of the club for seven years now. He has always shown tremendous commitment, unswerving allegiance, unflinching loyalty and one of the few foreigners who have taken to the club, the city and the fans as their very own. The Times journalist Tony Barrett wrote on Twitter that it is not his nature to grab any good offer and run away. However, one cannot simply blame him, if and a big if, he moves to Spain, because the club standing first in queue for him is not just another Champions League playing football club – they are the mighty Barcelona, arguably the best team on the planet of this decade.

The question for Liverpool is – Can they resist all temptations dangled above them, especially if the offer is raised to a really, really and really good value?

They should. They must. They have to. Just like the club taking a rigid stance over the surly Uruguayan, going with this dullard’ claims early this month, Agger is an indispensable asset and cannot be sold to anyone, not in this summer.

Liverpool need him badly more than he needs Liverpool. The club need him to take the onerous burden on his shoulder and lead from the back. Any new player, no matter how talented he is, would take time to adjust to the rigors of the league and throwing him straight-away in the mix, week-in-week-out without any reliable and experienced leader by his side, could prove to be too risky.

Secondly, with less than one week remaining, this is not the ideal time to sell your best players. The team would suffer; the moral of the dressing room would go down.

And finally, Agger is central to Liverpool’s fraction-in-a-million chance to qualify for the Champions League next season, along with Suarez. The team has been bolstered and if the manager’s words are to be believed, he would delve into the transfer market to make further incursions. With both Suarez and Agger, the chances of breaking into top four, theoretically, are more than without them.

What could be more damaging is losing two superstars in one transfer window will strike a hammering blow to the club’s ambition of getting back amongst the elite, where they belonged to. Players come and players go, but this is not an ideal time to lose your precious jewels. The yawning gap with the other teams is increasing at an alarming rate and the more the Reds are out of Champions League, more they will struggle to hit back, while the club would be in the same doldrums.

Football is unpredictable no doubt, but one can say with certain conviction that losing these two stars – Suarez and Agger – would cripple Liverpool for an unforeseeable time. The effect could be massive. The slim chances of reaching into the Champions League would dissipate in a whisker and Rodgers’ philosophies, FSG’s commitment, Steven Gerrard’s herculean efforts or using the club’s youth system as the crucible of excellence might not be enough to drag Liverpool out of the mire.

Rodgers and Liverpool have taken some courageous decision this summer, dodged the bullet with great aplomb over the Suarez saga and hopefully they’ll come out of this awkward quandary again, refusing all tempting offers for the big Dane.