Lorrie Fair has 123 caps for the full USA women’s national team. She is a 29 year-old midfielder, who at the age of 20 was the youngest member of the USA World cup winning team in 1999.

On 1st February this year Lorrie signed as a player for Chelsea in the English women’s Premier League, becoming the first American to play in that league. At 1.00 pm EST/ 10.00 am PST on Tuesday 12th February Lorrie will be conducting a web chat at www.chelseafc.com/america in which she will share her experiences of playing in England, and discuss what she hopes to accomplish as the first worldwide star to play in the English league.

During the U.S. summer tour in July, Fair began working for Chelsea as a U.S. ambassador on the club’s community and marketing initiatives in her home country.

She also has been an athlete ambassador for Right to Play, Chelsea’s Global Charity Partner since 2006.

When not on team duty, she will be helping Chelsea’s Football in the Community program particularly encouraging more girls and women to take up the game to improve health, fitness and to tackle childhood obesity.

Fair said: “I enjoyed meeting the team out in California last summer and I am a huge supporter of what the club is trying to do by encouraging grass roots development in the UK and throughout the world, and I will be working hard to get more women and girls playing.”

She will also be staying in contact with Chelsea fans in the U.S., where women’s football has a huge following, through the Chelsea U.S. members’ site, contributing a regular blog about her time in England.

The English Women’s game consists of a Premier League national division, with a Northern and Southern league feeding into it. There are several other leagues below that run by the English women’s football federation.

The game is not fully professional in England, but the Premier league clubs are semi-pro and affiliated to their male club counterparts.

Fair arrives in England with the game at a critical time. The FA is putting £4.5 million annually into the Women’s game to develop it at grassroots level. The national team reached the quarter finals of last year’s FIFA World Cup. Despite this, the game has not yet caught the public’s imagination. The Premier League has an unbalanced look about it with leaders Arsenal winning all their games by an average of four goals. Salaries in the game are low, and crowds for Premier League matches regularly struggle to reach three figures.

Chelsea women’s manager Shaun Gore said: “Lorrie is a great player and an icon in the U.S. No doubt she will generate a huge amount of exposure for the women’s game in this country. Someone of her stature can become a role model for many young aspiring female players in the UK and to help more women and girls participate in sport generally.”

Arsenal have won the title for the last four years running and are on course to do so again this season, as they currently have a 100% record after playing ten games. At the other end of the league, Charlton have only one point after thirteen games.

With eleven teams in each of the Southern and Northern leagues, there are a total of thirty-four teams playing at the top of the English game.

The Premier League as it stands has been run by the English FA since 1993, shortly after Japan became the first country to have a semi-professional women’s league a year earlier.

In its fifteen year history the Premier League title has been won by only five teams. Arsenal on nine occasions, Croydon (now known as Charlton) on three and Fulham, Everton and Doncaster once each.

Women’s football in England has been popular for almost as long as the men’s game, but in 1921 the FAs of both England and Scotland banned women from playing on FA members grounds. This destroyed the game, and it didn’t recover until the English women’s FA was formed in 1969 on the back of the excitement of the English men winning the 1966 World Cup.

The FA eventually lifted the ban on women players in 1971.

The arrival of Fair in England can’t really be compared to David Beckham’s arrival in the USA. Fair is no longer at the peak of her game and no longer represents her national side. OK, there are a few similarities!

The current popularity or otherwise of the women’s game in England means that Lorrie will be able to live her life in West London in relative obscurity. There will be none of the media scrums and paparazzi that Beckham is so used to. She can go unrecognised in her home town in the US, and will definitely not be the subject of too many stares or autograph hunters in London.

What Lorrie is trying to achieve for women’s football in England however, can be compared to what Beckham is trying to achieve for the men’s game in the US. The USA national women’s team have been, and continue to be, very successful. The women’s world cup has been played five times, and the USA have won two of those tournaments. Germany have also won two and Norway were victorious once.

On 20th January the USA team won a four team tournament in China by beating the host nation 1-0. They are a fully professional, full-time outfit. Women’s football in the US regularly compares favourably with the men’s game in terms of attendances and TV ratings. The women’s game has had an astonishing rise in popularity in the US, and it is this that Lorrie Fair will be looking to try to replicate in England.

She is used to being a trailblazer and spent a season playing for a men’s semi-professional side in California. Although allowed by the rules, every team she played against lodged an official complaint at her presence.

Fair is looking forward to playing, but is also going to be concentrating on coaching youngsters. Incidentally, Chelsea’s total outlay on Lorrie Fair, World Cup winner, will be less than the weekly wage of John Terry.

Lorrie has a tough job trying to raise the profile of the women’s game in England, but it is a challenge that she is sure to enjoy. There is a real determination to develop the game from grassroots level upwards, but it remains to be seen if the necessary support from the fans will be forthcoming.

“I had the opportunity to come to England and play for Chelsea, which was too good to turn down. It is an honour to play for such a great club.” Says Lorrie, “I am here first and foremost to hopefully help the team, which has so many good players, and at the same time the challenge of trying to raise the profile of the women’s game in England is also a big motivating factor. Those are the two key things that Chelsea and I focused on when we talked about me coming to play. It was about what I could contribute on the pitch.”

Lorrie’s first game for Chelsea ended in a 4-3 defeat at home to Doncaster Rovers, but she feels sure that better times are just around the corner for her team, and for the game in general. 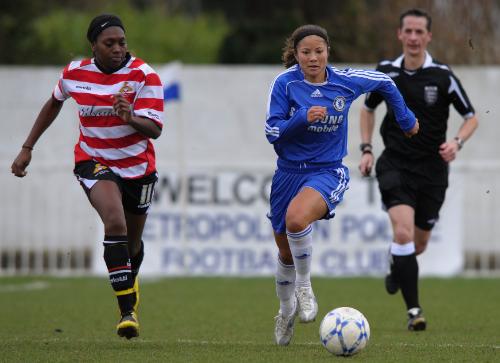