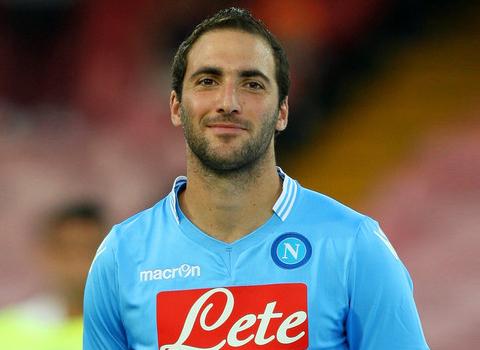 Argentine striker Gonzalo Higuain is very interested in a move to the Premier League, according to a report by Italy’s Sports Mediaset (scroll down to 10:38 AM) today. The Napoli man has been targeted by nearly every top English club including Liverpool, Chelsea, Manchester United and Arsenal, but according to the story, it is a move to Anfield that excites him the most.

Higuain has asked Napoli President Aurelo De Laurentis to seriously consider an offer from the Reds, as he looks for a new adventure in his career. The forward moved to the Serie A in 2013 from Real Madrid for €40 million, and has an impressive scoring record, netting 53 times in all competitions in two seasons.

It emerged only a couple of weeks ago that Napoli were keen to hold on to the 27 year-old. De Laurentis suggested that Higuain would be sold only if a club was willing to meet his buy-out clause of €100 million, effectively fending off interest from suitors in the Premier League. But now, with the player keen on a move, the situation is slightly different and the club could be tempted to sell if a good offer comes along.

Liverpool have had a tremendous transfer window so far, bringing in some fantastic additions like James Milner, Danny Ings and most prominently, Roberto Firmino. For all these signings put together, the Reds have only shelled out £29 million.

Another world-class forward is certainly needed for Brendan Rodgers’ men to have any chance of challenging for the title. After finishing runners-up to Manchester City in the 2013/14 season, they sold their best player in Luis Suarez to Barcelona. In the absence of a consistent goalscoring striker, they slumped to a 6th placed finish last year.

Both United and Arsenal are also on the prowl to sign a player up front, as their problems in that department last season almost mirrored Liverpool’s. United have let Radamel Falcao go, while Robin van Persie’s injury issues mean that there are no guarantees on the Dutchman’s goalscoring prowess anymore. While Arsenal’s Olivier Giroud did net 14 times in the league, his tendency to go missing when it matters most has garnered a lot of criticism from fans and critics alike.