Liverpool are all but set to seal a deal for Lazar Markovic as the Benfica winger will be Reds fourth signing of the summer transfer window.

The Guardian says the Merseyside club are closing in on the Serbian international which will see Liverpool cough up £25m for Markovic’s services. The Anfield club have already signed Adam Lallana and Rickie Lambert from Southampton, while Emre Can recently completed his switch to Anfield.

Markovic has long been a transfer target for Chelsea and Liverpool are set to beat the Blues in acquring a deal for the winger.

Liverpool manager Brendan Rodgers has switched his focus in signing Alexis Sanchez to Markovic after the Chilean forward made it clear over his intentions of not joining the Reds.

Barcelona are interested in signing the Premier League’s top scorer and Liverpool star Luis Suarez and wanted to involve Sanchez as a part of the swap deal. However, the former Udinese man’s chances of joining the Reds look grim as the Chilean is considering his options between Arsenal and Liverpool. 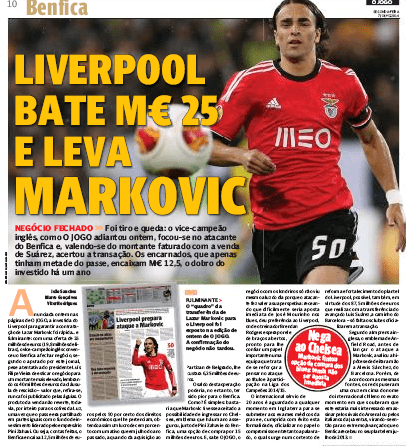 With Sanchez move almost looking unlikely, Rodgers wants to quickly shift his focus on Markovic and seal a deal for the Serbian winger. He played a crucial role in Benfica’s success last season, where they won the title from FC Porto and reached the Europa League finals – only to lose to Sevilla.

Benfica paid £6.25m for Markovic when they signed him from Partizan Belgrade last summer. A report from A Bola claims, The Portuguese champions paid only 50% of the transfer fee and from his potential sale to Liverpool, they will get only £12.5m (50%) of the £25m transfer fee from the Reds. 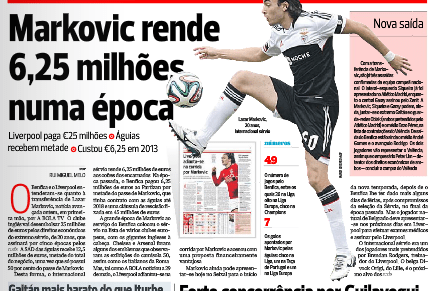 The Anfield outfit will sign Markovic for £25m, beating competitions from Liverpool’s Premier League rivals Chelsea The addition of the winger is likely to bolster the Reds’ squad for the new season.

With Liverpool almost set to lose Suarez, Rodgers will use the funds received from the sale of the Uruguayan international to strengthen his side to challenge for the Premier League title next season.

Do you think Markovic will be a terrific signing for Liverpool?