Sometimes being a vice captain of a club doesn’t help. Daniel Agger was clearly Liverpool’s third choice centre back last season with Martin Skrtel and Mamadou Sakho being the preferred first choice centre back pair for the Merseyside giants.

The Dane who has a contract with the Anfield side till 2016 featured just 19 times for Brendan Rodgers’ side last season thanks to an injury ravaged campaign. Moreover Liverpool have been linked with Dejan Lovren over the past few weeks which further indicates that the 29 year old is certain to fall down the pecking order if the deal goes through.

Given Agger’s age which is nearing the thirties Liverpool might not be able to eke out a sizeable cash deal for the defender. The player himself knows his current role in the club and will inherently admit that if he needs to move, its probably now or never.

The player gave an interview to Danish newspaper BT after the friendly game saying, “It’s no secret that I had problems last year, and I am considering things. Thick even. For the way things ran on last season, it was not sustainable for me. I’m here now, and now it’s up to me to show the coach that it is I who should play.” 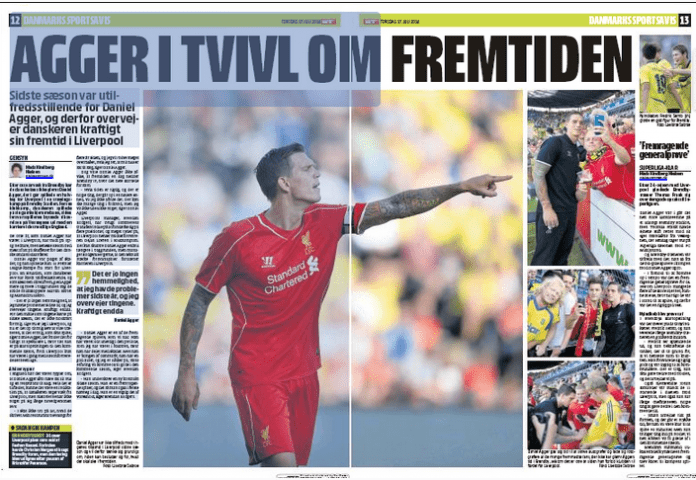 There are also reports that Agger has put up his house and restaurant for sale in England which is an indication that the defender is moving away from Liverpool but the player denied such claims.

“My restaurant was sold several years ago and I would be very surprised if I see that my house is up for sale.”

My view: The coming season will no doubt be huge for Liverpool with the Reds being in the Champions League after a long absence of six years in the highest echelons of European football. The side would need experience and Brendan Rodgers surely would admit it in hindsight. Barcelona were interested in Agger at the end of the last season but those rumours have died down ever since. Thus keeping everything into consideration the player in all certainty might have to engineer a move away from Anfield to cement a place in the starting eleven regularly.