La Liga giants Barcelona are looking to sign few quality signings once their transfer ban is lifted in January. And as per the latest report, they have fixed their eye on Liverpool player maker Philippe Coutinho.

Injury to Lionel Messi and other key players, lack of squad-depth partly affected by the transfer ban, meant Barcelona are left with no option than delving into the market to sign a top quality player in January.

According to Catalan based newspaper Sport, Barca’s priority is to sign a versatile attacking midfielder, who fits the style / brand of football endorsed by the club, and they see Coutinho as a perfect player for that role.

The club consider Coutinho, who would cost around €30m, as an “impressive” talent and they feel convincing the player to join Barcelona won’t be difficult as the Brazilian wants to play in the Champions League, which the club can easily offer.

Barcelona had already enquired about the availability of Coutinho in the summer when Liverpool showed an interest in signing Adama Traore. The Anfield club refused to negotiate any deal for Coutinho back then, but Sport reckon, the situation might change with Brendan Rodgers now being sacked. 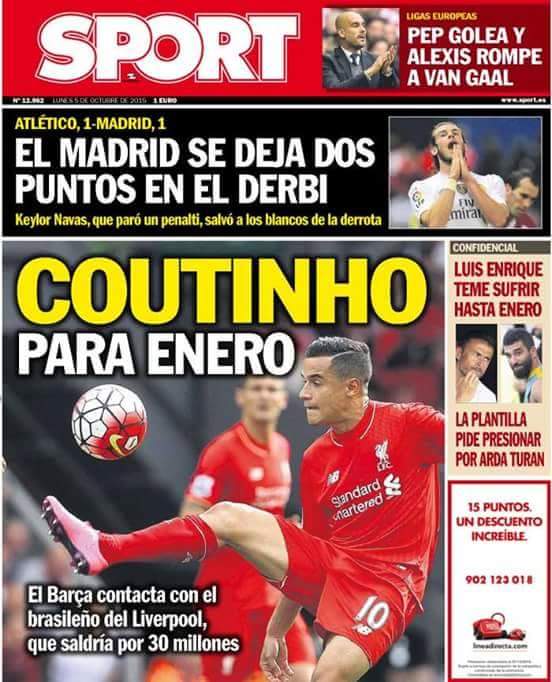 Sport believe Liverpool seem to be willing to negotiate a deal for Coutinho, if the Reds are presented a tempting offer on the table. There have been reported talks with the player’s agent, from where the newspaper understand the player is more than willing to wear the Barcelona shirt and reunite with ex-Liverpool player Luis Suarez.

Neymar, the Barcelona superstar, recently said in an interview that he would like to see Coutinho playing for Barcelona in future.

Coutinho was quick to quash all such rumours surrounding him, insisting he is only focussing on his Liverpool career at the moment.

I heard what Neymar said on the internet but I want to do well with Liverpool. I am happy here and I hope this season will go well for us. Of course it is a nice thing he said. Everyone knows he’s my friend. But I’m here and focused on Liverpool to help them do good things on the pitch, starting with beating Everton on Sunday.

It is a big match because our start to the season has not been good. But we won the last league game against Aston Villa and it’s important that we keep that winning feeling going.

We know we have to play better but it is still the beginning of a long season and we are calm. I don’t listen much to the bad things. We are focused on the pitch to do well and do good things. I am totally focused on Liverpool.

Coutinho is a special talent and he has vastly improved over the past two seasons. The 23-year-old is the creative heart beat of the Liverpool side, and he become somewhat of a talismanic figure at the club now, following the departures of Raheem Sterling and Steven Gerrard.

Barcelona find Coutinho as a perfect fit for them. He is versatile, likes to dribble, has an explosive acceleration to compliment his vision of finding players with killer passes, makes him an ideal fit for the Blaugrana.

So, what next? Barcelona are ready to wait and see the how things unfold in the next few months. At the same time, the club is worried that fellow rivals Real Madrid have also started monitoring the Brazilian and might make a move for him before they do.