Liverpool are back in the race for Barcelona winger Alexis Sanchez, who faces an uncertain future at the Catalan club.

Barcelona are preparing a massive rebuilding program in the summer, where several top players could be sold in order to bring in new faces. Already Cesc Fabregas has left the club to join Chelsea, while players like Xavi and Alexis Sanchez are facing uncertain futures at the club as well.

The 25-year-old has been linked with several top European clubs, with reports emerging earlier this month that Juventus had already agreed a five-year-deal for the winger.

Spanish newspaper Sport reckons, Atletico Madrid are showing a keen interest in Sanchez as well and Barcelona could use this opportunity to sign highly rated Spanish midfielder Koke, in a cash-plus-player swap deal offer. 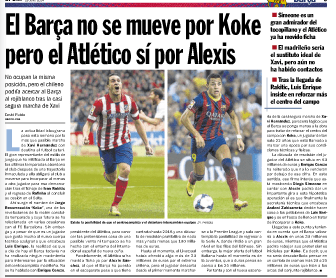 Premier League giants Liverpool were thought to be interested as well. Last month Italian radio station Sportmediaset claimed that the Reds were preparing a formal bid for the winger, while the ever reliable The Times journalist Tony Barrett further claimed that Rodgers would be willing to sign Sanchez, should he be presented with any opportunity. 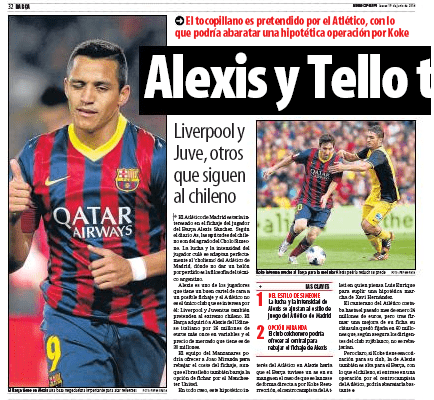 However, for the past 10 days or so, Manchester United have been mainly linked wit a move for Sanchez in both Italian and Spanish media, with Mundo Deportivo reporting the Red Devils are prepared to pay €25m to secure his signature.

Today, Mundo Deportivo reports that Liverpool are still in the race to sign Sanchez, who is valued at €30m. Another Catalan newspaper Sport claims that Barcelona might be interested to sell the winger to Liverpool in an audacious move for Reds striker Luis Suarez.