Liverpool target Juan Iturbe looks like he is heading to Real Madrid, but only if a odd course of events take place during the summer transfer window. 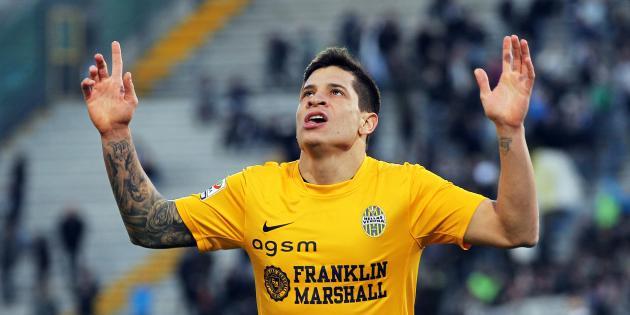 Iturbe, 20, is currently on loan to Serie A side Hellas Verona from Porto, where he has caught the eye with a number of dazzling attacking displays.

Liverpool and Chelsea were among those reportedly interested in securing the youngster this summer, but Verona now look likely to make Iturbe’s loan move permanent, by handing over a fee of around £15m to Porto this summer, a figure written in the terms of his loan agreement.

Now, this is the tricky part. Verona will then, according to TMW, quickly sell the Argentine on to Real Madrid, for a reported fee of £25m, with the Serie A side’s sporting director Sean Sogliano in Madrid on Monday to discuss the bizarre deal.

The deal’s potential existence was also flagged up by talkSPORT earlier this month, with Liverpool losing the race for the winger, with the Porto-Verona-Madrid transfer triangle seemingly on the cards.

Considering the player has previously expressed his love for Serie A, and the stunning crop of attacking talent currently residing at the Bernabeu, Iturbe could well stay with Verona for at least another season before moving to the Spanish giants, which would arguably translate into the perfect transfer for all parties concerned.