The news would excite Liverpool fans a little bit. Barcelona duo Cristian Tello and Martin Montoya, who are reportedly targets of the Anfield club, have not ruled out a possible exit from the Catalan club, at the end of the season.

According to reports from Catalan newspaper, Sport, both the youngsters participated in a promotional event for their brand Adidas, where at the end of the program they were asked about their personal future and their status at the club.

Tello, who is a reported target of Liverpool, renewed his contract last August till 2018 and has a release clause of €25-35m Euros, said, “I’m young, I want to play and enjoy. If it is not possible at the club, I will consider the outcome at the end of the season.”

The 22-year-old, who admitted of rejecting a move to Liverpool back in September, has only made 2 league starts for Barcelona and mainly limited to sub appearances. 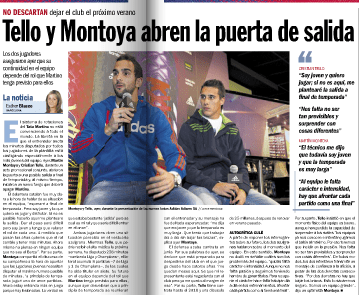 Martin Montoya, the full-back has been strongly linked with Liverpool as well. Back in October, it was reported that Liverpool are leading the chase to sign the youngster.

He said, “I’m at the club 14 years ago and I still have many months left (in my contract). I expect much more than that, but I’m young and I want it keep playing.”

Liverpool already have Glen Johnson and Martin Kelly in that position so it will be interesting to see whether Brendan Rodgers actually move for him or not in coming months.