Martin Skrtel’s 97th minute header ensured Liverpool deservedly snatch a point to deny Arsenal a significant victory at Anfield on Sunday night. The Gunners would be disappointed that they didn’t hold on to their lead but in the end it was a fitting result to a game that saw a host of defensive errors leading to all of the four goals. Philippe Coutinho gave the Reds a deserved lead but Mathieu Debucy restored parity in added time of the first half. Olivier Giroud’s strike could have well won the game for Arsenal before Skrtel’s rescue act.

Here are the five talking points from Anfield:

When will Liverpool learn to convert chances: At the end of the game, the stats counter read, 27 shots for Liverpool, 10 on target, yet the home side needed Skrtel’s header to grab a share of the spoils. The home side definitely played their best since the 3-0 win against Tottenham earlier this season, but they must learn on how to take their chances. The attacking triumvirate of Lallana, Markovic and Coutinho linked well despite Raheem Sterling having one of his off games. There have been talks with Liverpool being in line for a striker in January but the answer lie within, chances need to be grabbed not fluffed.

Arsenal seriously need an upgrade on Mathieu Flamini, that too quickly: It’s easy to see why the Gunners need a central defensive midfielder. The name that has been doing the rounds is Dinamo Zagreb’s Marcelo Brozovic who might be available for as low as €10m in January. The Frenchman is well past his sell by date, hardly does his job and is caught out of position quite often. When you’re playing a 4-1-4-1 formation, the pivot in front of the back four needs to have an inch perfect game. Not for Flamini though, who was at blame for Philippe Coutinho’s opening goal, one which could have easily been avoided.

Martin Skrtel and Lucas Leiva deserve the mentions: Lucas is set for a move away from the club in January with both Inter Milan and Napoli interested in the Brazilian. However as today’s game showed, he might still have a future at Anfield. Lucas had a successful passing of 90% and despite his late sloppiness, hardly put a foot wrong. As the below hear map shows he was almost everywhere in the middle, breaking down Arsenal’s attacks and was vital to the Liverpool dominance in midfield. 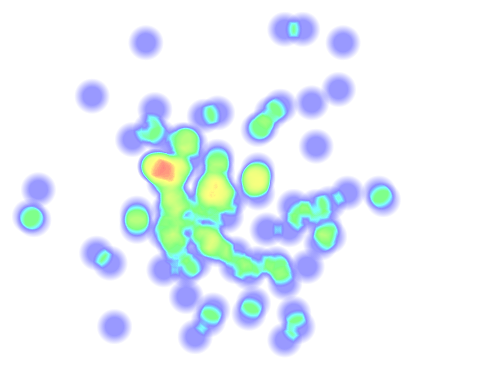 Martin Skrtel was at blame for conceding in the added time of the first half but despite taking a blow on the head from Giroud’s trailing boots, the Slovakian rose highest to rescue a point. It was worthy of a script which couldn’t have been better written by the man, they call by Ninja in Merseyside.

Nothing wrong is Zonal Marking but it needs to be executed perfectly: In England, every now and then you would hear pundits saying that “Zonal marking is not defending.” But what people tend to ignore is that goals are scored even when defenders are man marking. It’s not that man marking is the be all and end all of defending. It’s the system that leaks goals. 2 of the 4 goals could have been easily avoided, but there in comes the need of a team being quick to respond and get to the second or third balls. What was startling that Debuchy’s equaliser came from a series of events where two of the smallest players were allowed almost free headers. Flamini was quick to head the ball following Liverpool’s poor clearance before Debuchy got the unlikeliest of headers to change the complexion  Skrtel’s last gasp header too exposed Arsenal’s lack of mastering the art.

Arsenal need to learn from Manchester United: Arsene Wenger would be gutted at throwing away a lead playing against ten men, but the London side could have easily left with three points from Merseyside had they been more proactive. A corner should never have been allowed on the far right side when Nacho Monreal came on to support Kieran Gibbs in the left wing back role. Skrtel inevitably scored, but had the Gunners taken a cue from United, things could have been different. Th Red Devils have shown time and again this season that you need to hold on even when you are not playing at your best level.