Like a butterfly floating around the pitch, Lionel Messi has an uncanny ability for making things look easy.

With the ball at his feet and a pair of defenders flanking him on both sides, what seemed like a lost cause only seconds before turns into an opportunity to make the opposition pay. And with the flick of the foot and a quick shimmy, Lionel Messi does what he’s done so many times before: he turns nothing into something in the blink of an eye.

Barcelona’s best player–and possibly the greatest player on the planet–has a knack for the spectacular. Since making his debut for the club in 2004, Messi has gone on to scoop up almost every individual award while leading Barcelona to the brink of an unprecedented triple this season.

Read the Soccerlens exclusive, after the jump.

FC Barcelona versus Manchester United FC, is it the perfect final?

I don’t know if it is perfect but it is a really nice match up. Both teams play very good football and they always play each game to win it. Playing the final against Manchester United is something that we dreamed of earlier this season because they, just like us, always try to play great football.

It’s clear that there is not only one way of winning a game. The key will be to focus on our way of playing and to be the main protagonists. We will have to play as we usually do, without leaving aside our natural style just because it is a final. I think Pep Guardiola is going to tell us that and a lot more. We may talk about specific things related to Manchester United, but Barcelona will impose its style. I am positive.

Well, I don’t know if Guardiola’s Barca is that different from the Rijkaard team. The thing is that players usually have ups and downs, and today many of Barca’s players are going through a very good spell of form. This team always tries to play well and to score as many goals as possible. It was the same last season.

Andres Iniesta and Xavi Fernandez were excellent against Chelsea FC. Are they the best midfield pairing in the world?

Playing next to Iniesta and Xavi makes everything easy for the rest of us. People often talk about Samuel Eto’o, Thierry Henry and me, but they are great players too and were amazing against Chelsea. They maintain the team balance and tell us how to proceed according to what is going on in the game.

How much will the team miss Dani Alves, Eric Abidal and Rafael Marquez?

Of course we’ll miss the three of them, but Puyol is coming back and that is a good thing. This team is very complete, and if we want to be champions we will have to work together. We cannot worry about the absence of one team-mate, instead we have to think that the player that takes his place will be a great substitute.

Chelsea did a very good job in stopping Barcelona score for 180 minutes. Do you fear United will use similar defensive tactics?

What is your view of Sir Alex Ferguson as a boss?

I think he is very smart. He probably gives a lot of freedom to his players, allowing them to do whatever is necessary on the pitch, and that is very good.

Have you ever spoken to Sir Alex Ferguson?

I have only seen him a few times in person and that’s it. We haven’t spoken much, we just congratulated each other at an awards ceremony. He is a great coach. It is not common for a coach to stay as long at a club as important as Manchester United. If he managed to stay that long it is because he is very, very good at his job. 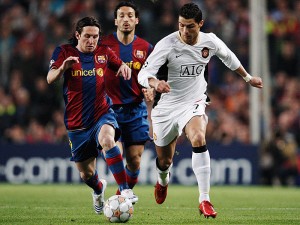 How difficult will it be to stop Cristiano Ronaldo in Rome?

Cristiano Ronaldo is a brilliant player. If he is having a good day, marking him is very difficult, but I hope our defence can stop him on the night. He is very fast and hard to mark – and he also has very good shots from outside the area as we’ve all seen!

Aside from Cristiano, which of United’s players do you have the most respect for?

Carlos Tevez has an amazing style and he is very devoted to the game. Nemanja Vidic is a great defender, Wayne Rooney is an incredible scorer, and Paul Scholes is a very good midfielder. Manchester United is full of great players, I cannot pick just one.

What is it you admire most about Wayne Rooney?

Rooney is amazing. He is a scorer of great goals and he always gives his best for the team. He is a real team player: he is not selfish and always does everything unselfishly for the team.

Finally…what would it mean to you personally to influence this final and win it for Barcelona?

Winning the Champions League would be the best. It is the most important title in the world as regards to club football. I hope we win it, we deserve it. Manchester United is a great team but I have faith in Barcelona. I really hope we can win it. In the last match against Chelsea we were lucky in a way because the game seemed lost and we finally won it, so maybe that was a sign to show us that good things will happen to us in Rome.

Messi and his Barcelona team-mates will have the chance to stop United’s dream quadruple at the Stadio Olimpico tomorrow night in what is being billed as an highly anticipated final. Catch all of the action and commentary on the Soccerlens Champions League final live blog starting at 18.45 GMT.

Update: In case you’re wondering, this is how we scored the interview.