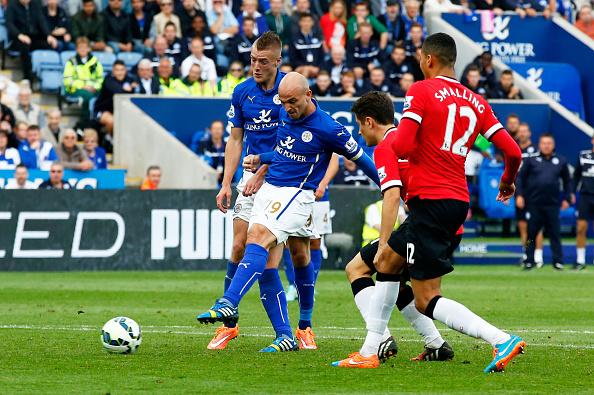 Leicester City earned a historic 5-3 victory over Manchester United at the King Power Stadium in Sunday’s lunch time kick off in the Premier League. The Red Devils cruised to a 3-1 lead just before the hour mark, but the home side scored four goals in the next twenty minutes to seal an emphatic victory.

Here are the key observations from the lively encounter.

Van Gaal needs to get his formation correct: Louis Van Gaal opted for a 3-5-2 setup in the first three PL games, the same formation he used during the World Cup with Netherlands. The Dutch tactician fielded a midfield diamond last weekend as United thrashed QPR 4-0 at Old Trafford. Radamel Falcao was brought in for Juan Mata to partner Robin Van Persie up front. Wayne Rooney played in the number ten role at the tip of the midfield diamond.

Angel Di Maria and Ander Herrera played on either side of Daley Blind to complete the midfield three. Technically United don’t have the right personnel to operate in a 3-5-2 and the diamond set-up is ineffective against team that overloads their midfield. Thus Van Gaal must look to accommodate Mata in the starting line-up. The Spaniard is in good form having scored 8 times in his last 10 appearances.

Lack of quality defenders will hurt United: Nemanja Vidic, Patrice Evra and Rio Ferdinand all left the club in the summer leaving a massive void in the back four. The United defense was stretched every time Leicester had the ball. Taylor Blackett’s inexperience was exposed horribly and Rafael’s petulance to give away the penalty was cynical. Jonny Evans limped off in the first half while Phil Jones is still nursing an injury on the sidelines. This leaves United having Chris Smalling as the most recognized centre back. Thus Marcos Rojo will have to slot in the centre back role next week; Luke Shaw looks certain to make his debut.

Mark Clattenburg has a shocker: With Howard Webb calling time to his referring career, Mark Clattenburg is currently the most established referee in England. However the 39 year old had a horrendous game much like the United defense. Leicester’s Ritchie Da Laet was let away thrice, all of the maligned challenges definitely warranting a second yellow card.

Jamie Vardy was then let off despite shoving Rafael out of his way which led to the penalty. As respected referee Graham Poll gave his verdict on the incident in his column in Daily Mail claiming, “It’s hard to criticise a referee, but the elite group are told by management that they cannot defend the indefensible.”

Dreams do come true: Leicester’s Jamie Vardy had a fantastic game troubling the United back line with his direct running. A couple of seasons ago the 27 year old featured for third tier side Fleetwood Town. His mercurial rise from the lowest ebbs of English football would inspire many. Vardy would cherish the moment in his lifeline when he was awarded the Barclays Man of the Match Award by Esteban Cambiasso. As they say, “You can always get exactly what you dream of. Think and dream big.”