Thomas Lemar is ‘likely’ to sign for Liverpool before tomorrow’s deadline, report L’Equipe in France.

L’Equipe say Liverpool have made a new offer of €80m and Divock Origi on loan, which they expect AS Monaco to accept.

Liverpool’s new improved offer for Lemar was reported yesterday, but it still wasn’t clear if AS Monaco’s vice president, Vadim Vasilyev, would accept the offer. 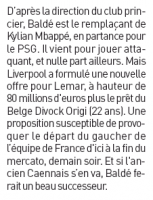 L’Equipe believe a transfer could be completed by tomorrow evening and that Keita Baldé would be a fine replacement for him.

Liverpool are reportedly very keen on signing the 21-year-old and it now appears a big offer has again convinced AS Monaco to sell another key player.

Liverpool, on the other hand, are desperate to sign Virgil Van Dijk & Thomas Lemar before the end of the transfer window, and could also make a move for Alex Oxlade-Chamberlain.