Real Madrid began their game at Sevilla with the same eleven that had slaughtered Valencia in midweek. However, in the Sanchez Pizjuan they were outplayed by a Juandeless Sevilla team who are beginning to look like the team that has so impressed for the last two seasons.

For the first fifteen minutes of an intense encounter Madrid traded blows with the hosts, but then two goals in three minutes left them groggy. First a clearance fell towards Seydou Keita who had time to line himself up before letting fly with a wonderful drive from 25 yards that swerved away from Casillas and into the top corner. Then in the 20th minute a long ball from Alves was brilliantly controlled by Kanoute who then saw his shot blocked by Casillas but Luis Fabiano was on hand to stab in the rebound.

Madrid never recovered from the double blow and resorted to playing dirty. After 37 minutes Diarra was lucky that the ref didn’t see his elbow on Crespo, the Sevilla left back had to be substituted with a broken cheekbone. Then a couple of minutes later Sergio Ramos was fortunate to only see yellow after squaring up to Keita and grabbing his throat. 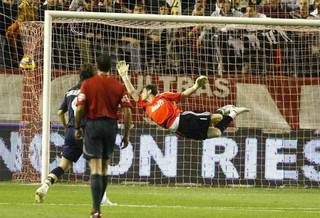 Ramos saw his second yellow early in the second half for a tackle from behind on Capel. The home crowd showed they had no love for their ex-player by the way they celebrated his dismissal. Sevilla could easily have won by more goals but poor finishing by Luis Fabiano kept the score down to 2-0. Bernd Schuster showed a lack of elegance after the game by referring to the fact that the referee was Catalan when he only had his players to blame for the defeat. Keita and Poulsen deserve a special mention for the way they dominated in midfield for Sevilla.

Barcelona move to within one point of the leaders after an easy 3-0 win over Betis. There were good performances from Ronaldinho and Thierry Henry who have both received a lot of criticism recently. Henry opened the scoring after half an hour poking home an excellent through ball from Iniesta. Ronaldinho scored the other two both from direct free kicks. Leo Messi also had an excellent game and came close to scoring a similar goal to his wondergoal last season against Getafe, but this time his effort went wide of the far post. Here’s the full report of the Barca win over Betis.

For the second time in a week the Calderon bore witness to a seven goal thriller, but this time Atletico Madrid came out losing. Pablo and Simao had given them a 2-0 lead against Villarreal, but Rossi with his seventh goal of the season, and Fuentes pulled it back to 2-2. Kun Agüero then scored his seventh of the season to put Atleti back in the lead, but Nihat had the last word for Villarreal equalizing with 20 minutes to go and then snatching the winner in the closing minutes. Villarreal remain in third place on level points with Barcelona.

Valencia move back into fourth place above Atletico, after winning 0-2 at Mallorca. Fernando Morientes scored twice with Valencia’s only two shots on target of the match. New coach Ronald Koeman had not yet taken charge of the team and watched the game at home on TV.

At the bottom of the table there was a first win of the season for Levante who beat Almeria 3-0. Until this game Levante had only scored three goals in ten games, but this week they managed three goals in the first 35 minutes thanks to a hat-trick from Rigano. His first goal was the quickest of the season so far scored after just fourteen seconds.

Valladolid moved out of the bottom three by winning 2-3 at Zaragoza. Oliveira opened the scoring for the home team with his sixth goal of the season, but two goals from Victor and another from Alvaro Rubio in the space of six minutes gave the visitors a 1-3 lead at half time. A late goal from Diego Milito could not prevent Zaragoza’s first home league defeat of 2007.

Getafe continued their good run by winning 0-2 at Osasuna. Things were pretty even until the 80th minute when Cruchaga was sent off for bringing down Uche in the penalty area. Pablo Hernandez scored from the penalty and a minute later Granero grabbed the second to seal the visitors’ win.

Things look slightly better for Deportivo de la Coruña after their 0-2 win at Murcia. Second half goals from Xisco and Guardado gave them the win that see them move up to 14th in the table

Racing Santander were heading for a win at home to Espanyol thanks to a goal from Tchite. Espanyol were down to ten men when Coro was sent off with nine minutes to go, but in the last minute Luis Garcia was fouled and Raul Tamudo converted the penalty that meant the game finished 1-1.

Finally, Recreativo moved down into the bottom three after losing 2-0 at Athletic Bilbao. Two goals from Joseba Etxeberria earned the home team the three points.

Nic writes for the Barca blog.