It’s that time of the year again. With the days fast approaching December 31, awards for the “Best XI” of 2008 are being handed left and right. Even Soccerlens jumped on the bandwagon (see our “Soccerlens All-Star XI – The Best Footballers of 2008” post).

So, while you vote for UEFA’s Team of the Year here (winners announced in January), let’s have a look at what the main sports newspaper in France has in store for us this year. Here’s L’Ã‰quipe‘s All-Star XI Football Players for 2008.

And once again, don’t be surprised if Premiership elements are leading the way…

Firstly, a point should be made that this year there were two “Best XI” selections: the first one made by L’Ã‰quipe‘s journalists, and the second one voted online by users on the paper’s official website. Differences between the two formations abound, but one striking similarity is that there’s a large majority of players from the EPL (6/4, i.e. six in the journalist vote and four in the popular vote). The Spanish Liga is right behind with 4/4, shortly followed by the Italian Serie A (2/1) and the Bundesliga (0/2).

Another noteworthy point: seven of the players selected are European champions, in one form or another (four with Man Utd, three with Spain). 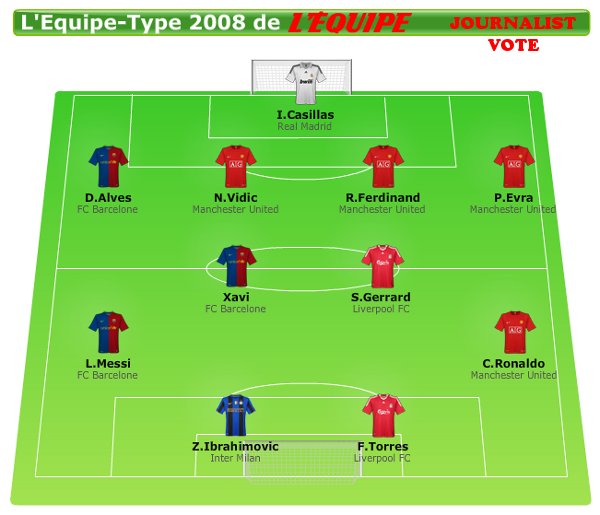 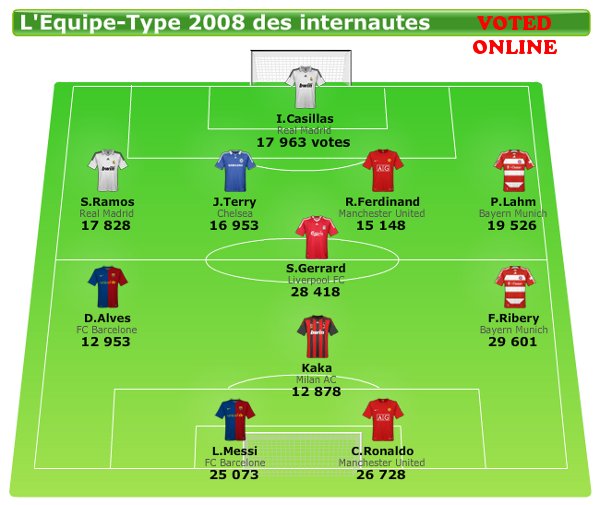 Note that only six players were selected in both formations (Casillas, D.Alves, R.Ferdinand, Messi, Gerrard, and C-Ron).

A few comments & some notable omissions (in my opinion):

Feel free to further bash L’Ã‰quipe‘s choices in the comments below but remember that any type of “Best Of” rankings have to be taken with a grain of salt. Subjectivity reigns, as always.

Note: For reference, here’s last year’s selection, and don’t forget to pay a visit to the newspaper’s official website. The award page features player profiles for all winners.
.

Marco Pantanella is the author & editor of the mCalcio blog