Serie A champions Juventus have set their sights on Arsenal target Mario Mandzukic in the summer, according to a cover page story by Italian newspaper ‘Tuttosport’. 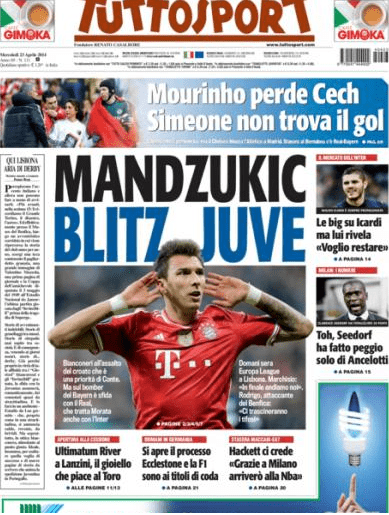 The Old lady are desperate to revamp their squad to mount a serious Champions League challenge next season and manager Antonio Conte believes that Mandzukic will be the ideal partner with Carlos Tevez up front for the Turin giants.

Robert Lewandowski’s imminent arrival at the Allianz Arena will surely mean that the Croatian will play second fiddle to the Pole for the Bavarians. Arsenal have been linked with Mandzukic over the past few months and there are strong reports that the Gunners will go all out for to land the 27 year old in the summer.

Mandzukic has been in lethal form this season, scoring 18 times and grabbing four assists in 29 appearances in the Bundesliga, as Pep Guardiola’s side successfully defended their title in record time.

Bayern Munich CEO Karl-Heinz Rummenigge however is desperately trying to tie down the Croatian at Allianz Arena beyond the summer, and is confident of keeping the striker at the club, as he told German daily Sports Bild,

“I have spoken personally with Mario and I know that he will stay with Bayern Munich. He is a very important player for us and has a contract until 2016. Lewandowski? We’re glad he’s coming, but at the same time, we’re happy that Mandzukic will stay.”

So what do you think? Will Mandzukic stay at Munich or will leave for Juventus or Arsenal in the summer?