According to reports in Italy, Juventus will negotiate a deal with Real Madrid for Alvaro Morata on Monday which proves to be a major setback for Arsenal. The Gunners are said to be in pole position for signing the 21 year old but the Old Lady aren’t giving up yet, eager to make a last ditch effort to snatch the player from the clutches of the Gunners.

The Bianconeri want to wrap up the deal as soon as possible and they’ll sit with Real Madrid to discuss it on Monday before the UNESCO Cup match between Real Madrid’s veterans and Juventus’s legends. 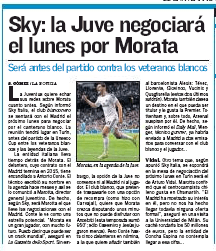 Real Madrid President Florentino Perez also shed light on the matter, speaking to Radio Onda Cero and Radio Marca , “We will talk with Ancelotti and with Morata to evaluate what is best for everyone.”

Juventus have been after Morata for a while now, with Conte considering him a player with the potential to be world class.

However, this option doesn’t excite Real Madrid or the player himself; like they did with Carvajal, Real Madrid want to sell Morata with a buy back option and let him get regular playing time and experience, which doesn’t seem certain given the array of forwards Juventus have in their ranks plus the rumoured addition of Alexis Sanchez. Morata also wants to play where he has good chance of being a starter and he’d prefer the Premier League, where Tottenham and Arsenal have shown interest.