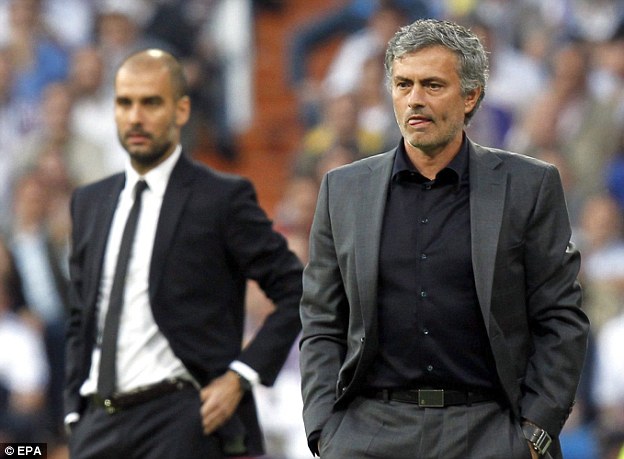 The pair are often very different in their methods: Mourinho is often more pragmatic on the pitch and vicious in his press conferences, while Guardiola’s sides often play with a highly entertaining style.

The debate continues to roar on about who is better. The Portuguese has achieved incredible things but has also suffered a few failures here and there. Meanwhile, the former Barcelona man has won league titles everywhere he’s been, but has often done it with some of the world’s most talented players.

Whichever side of the debate you’re on, there’s no denying that these two have dominated the latest generation of football. And, when they clash, it’s often quite a spectacle.

Here are some of the best meetings between Jose Mourinho and Pep Guardiola.

Pep Guardiola’s Barcelona side were arguable the most dominant football team in the world at the time, and when Pedro put them ahead, it was looking like an uphill battle already for the Nerazzurri.

However, Mourinho’s men fought back and turned the tie on its head. Wesley Sneijder equalised before half time, and second-half goals from Maicon and Diego Milito gave Inter a commanding lead going into the second leg.

Barcelona were unable to overturn the two-goal deficit thanks to classic Mourinho-ispired rearguard, leading to a piece of iconic Mourinho celebration.

After completing the treble with Inter, Mourinho sought a new challenge at Spanish giants Real Madrid.

His first El Clasico in charge of Los Blancos was not one he would want to remember. Guardiola’s side absolutely played Madrid off the park in a tiki-taka masterclass.

Xavi and Pedro got the ball rolling with first half goals, and then a brace from David Villa and an injury time strike by Jeffren completed the humiliation. This was further compounded by a late red card for Sergio Ramos.

2011 gave us an El Clasico semi-final in the Champions League, and it did not disappoint.

After an ugly 75 minutes or so which saw altercations, cynicism, and plenty of cards, Lionel Messi rose to the top with a brace. The first was a tidy finish from Ibrahim Afellay’s cross; the second was an exceptional solo goal, dribbling past four players before placing the ball past Iker Casillas.

It wasn’t all bad news for Mourinho in his debut season at the Bernabeu. He had in fact beaten Guardiola in the Copa del Rey final a week earlier.

Mourinho’s ultimate revenge on the Catalan giants came on 21st April 2012, when his side effectively won the league at the Camp Nou.

Sami Khedira put the visitors ahead in the 17th minute with a scrappy opener, before Alexis Sanchez netted an equally scrappy leveller.

However, rather unsurprisingly, Cristiano Ronaldo was the hero, as he converted from Mesut Ozil’s inch-perfect through ball.

The win put Real Madrid seven points clear at the top of La Liga with just four games remaining, all but ending Barcelona’s chances of winning a fourth successive title.

Throughout their spells in Manchester, there is no doubt who came out on top. Guardiola won back-to-back Premier League trophies with record points totals, while Mourinho lasted just two-and-a-half years before being sacked.

Despite this, there was some joy for the Portuguese.

On April 7th 2018, City had the chance to seal the title against their bitter rivals. First-half goals by Vincent Kompany and Ilkay Gundogan set the Cityzens well on their way to a comfortable victory.

The second half was very different. A quickfire brace by Paul Pogba got the Red Devils back on level terms, and Mourinho’s men secured the three points with a winner by Chris Smalling.

In the grand scheme of things, the result meant very little. Man City still won the league by an absolute landslide. However, it prevented what would have been one of the most humiliating days in Man Utd’s history.