Jose Mourinho: One Manager To Rule Them All 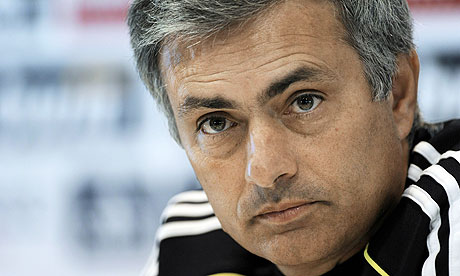 Real Madrid wrapped up the La Liga title last weekend, with Jose Mourinho leading the Santiago Bernabeu outfit to their first Spanish top-flight success in four years. A convincing 3-0 away win over Europa League finalists Athletic Bilbao sealed the triumph, and broke Barcelona’s stranglehold over the game in Spain.

The achievement has not gone unnoticed in west London, as former employer Roman Abramovich is reportedly eager to bring ‘The Special One’ back to Chelsea. The latest success is Mourinho’s 19th trophy in his managerial career, a quite unbelievable achievement.

From taking over at Portuguese giants Porto in 2002 until now, Mourinho’s record has been exemplary. The Setubal-born trainer started as he intended to carry on in his first season at the Estadio da Dragao, winning the Primeira Division at a canter, the Taca de Portugal and the UEFA Cup in a momentous season. In the league the total of 86 points out of the possible maximum of 102 was a Portuguese record, whilst Mourinho’s men beat his former club Leiria in the cup final and Celtic in the European finale.

Mourinho and his Porto team really shot into the limelight the following season, by retaining their Primeira Division title and against the odds lifting the Champions League. Porto sealed their domestic title with five weeks of the season still to play, and after eliminating Manchester United in Europe, lifted the Champions League crown with a 3-0 win over Monaco.

Porto’s elimination of United drew English attention to Mourinho’s achievements, and the successful trainer took over the Chelsea managerial position. After proclaiming himself ‘The Special One’ in his first press conference, Mourinho went on to put his money where his mouth is, lifting the Premier League crown in his debut season, the Blues’ first in 50 years. Chelsea also beat Liverpool to lift the Carling Cup.

With the Blues team given self-belief by boss Mourinho, Chelsea went on to retain their Premier League title the following season, with a 3-0 win over Manchester United proving their dominance. They also lifted the Community Shield by beating Arsenal 2-1, but the Champions League remained all-elusive.

Mourinho’ last full season at Chelsea saw his men relinquish their Premier League crown to Manchester United, and they were eliminated from the Champions League by Liverpool. Despite this, the Blues still lifted the FA Cup and League Cup in a domestic double.

After being shown the door by Abramovich in the 2007-08 season, Mourinho took over at Inter after an eight-month spell away from the game. Similar to his time at Chelsea, he wasted no time in laying down a landmark, and won the Serie A title at the first time of asking and the Supercoppa Italiana. Despite winning the Scudetto by a ten-point margin, elimination from the Champions League at the hands of Manchester United was a major frustration for the perfectionist coach.

Arguably Mourinho’s most successful season in management, Inter were unstoppable in 2009-10. The Nerazzurri retained their Serie A crown in impressive form, beat Roma to claim the Coppa Italia trophy and after defeating Barcelona in the semi-finals, lifted the Champions League crown with victory over Bayern Munich. The next day Mourinho admitted that the win would be the last game in charge of the Italian giants.

Mourinho was announced as the replacement for Manuel Pellegrini at Real Madrid for the 2010-11 season, with the capital-city side looking for a solution to Barcelona’s dominance at home and on the continent. In this first campaign in Spain the Portuguese coach failed to stop Pep Guardiola’s men achieve glory in La Liga and the Champions League, but did beat the Catalan giants in the Copa del Rey final.

This season has been a different story for Madrid, who have been comprehensive and deserved winners of La Liga. The main criticism aimed at Mourinho’s men was their inability to beat Barcelona in a clash between the sides, but a 2-1 victory at Camp Nou got this monkey of the team’s back and all-but secured the division title. Although Champions League still eludes Mourinho at Madrid, the Portuguese coach will look to dominate all competitions next season.

There are increased rumours over Mourinho’s future and a potential move back to England, but this is unlikely, as the proud coach will feel that he has unfinished business in Spain. Next term Madrid will have a transitional Barcelona side to deal with, and the Santiago Bernabeu fans will crave that Mourinho deliver the Champions League back to this great club.