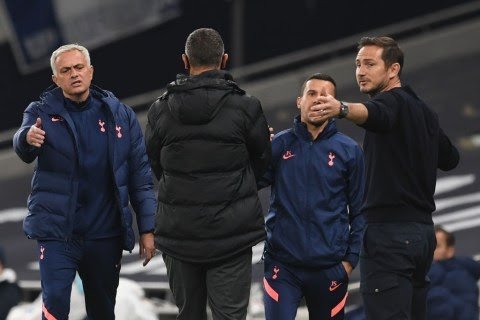 It was a disappointing night for the Blues and Mason Mount who missed the only spot-kick in the penalty shootout after Erik Lamela’s late equaliser had cancelled out Timo Werner’s goal.

But the night will be remembered especially for Frank Lampard’s war or words on the touchline with his old manager Jose Mourinho and Eric Dier’s dash for the loo in the 76th minute.

During the post-match conference, the Tottenham manager was asked about his exchange with Frank on the touchline and the former Chelsea boss claimed there was nothing wrong as he was only sharing his opinion to his ‘old friend’.

“With Frank, the most important thing is my feelings towards him rather than any words we exchanged. I owe him everything he gave me, he always gave me everything he had as a player and I never forget that. My feelings towards him will always be feelings of how much I owe him for how much of an incredible player and friend he was. The only thing I was telling him, just an opinion of an old coach to a young talented coach, which was when the players need us it is when they are losing, when they are winning we don’t need to be the protagonists of the touchline, we need to be there when they are losing.” Mourinho said to the press.

“In the last match when they were losing 3-0 I felt really sorry for him because he was sad and quiet in his chair. In terms of football I can’t teach him anything, he knows football, it is just an opinion, stay on the touchline when your team is losing and stay calm when your team is winning.” He further stated.

Speaking to Sky Sports after the game, Lampard also quickly cleared up the situation and insisted there was no animosity from his end.

“We were having some fun, I get on well with Jose. I was saying he speaks to the referee more than his players, I have huge respect for Jose. All was well at the end and that will never change.” Lampard said.

The Blues will face Crystal Palace next on Saturday at Stamford Bridge while Tottenham will host Maccabi Haifa on Thursday for their Champions League play-off match.