The extraordinary delays in a resolution to the Terry-Ferdinand affair have already resulted in the wholly unnecessary cop-out by the FA and the Premier League in asking Chelsea and QPR to forego handshakes in their recent league clash. The pointlessness of team handshakes apart, the worst that could have happened would have been the whole of the QPR contingent refusing to shake John Terry’s hand.

Now you might refuse to shake Terry’s hand on principle in any case, but the more likely explanation was that the football authorities wanted to avoid the sort of press fiasco that followed Wayne Bridge’s refusal to shake John Terry’s hand and therefore deny tabloids extra ammunition to throw at Terry / the FA / English football in general.

Fair enough – but surely this could have been resolved a lot quicker through an expedited judicial process where the relevant witnesses and parties involved would have been due in court regardless of their ‘footballing’ commitments? Unless the reasons for the delay have nothing to do with time and everything to do with Chelsea and the English FA.

A lot of people forget that John Terry has priors when it comes to racist comments – a few years ago he was thought to have racially abused Ledley King during a Chelsea-Tottenham game. Terry was already getting sent off for an incident that happened in actual play, but the reaction of players on both sides was damning. King, Zokora and Chimbonda all squared up to Terry, with Essien and Makelele from Chelsea’s side running up to Terry and asking him to repeat what he’d said.

That incident is long gone from the memories of the tabloid press but it’s just one of many indiscretions by Terry (and his family) – and there’s sufficient evidence (even if the press isn’t using all of it) to suggest that if there are any moral standards to being a captain of Chelsea and England, John Terry shouldn’t be it. 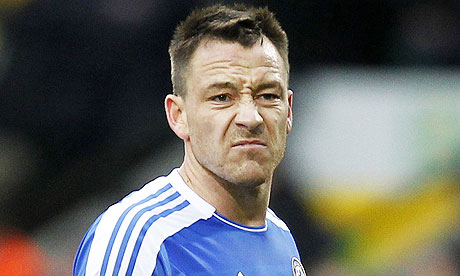 The best of John Terry

There’s sufficient evidence to suggest that Terry plays at his best when he’s dogged by controversies (on or off the field). His performance against QPR is just one of many telling contributions he’s made in a Chelsea shirt, and after every controversy there seems to follow a hallmark John Terry performance on the pitch as if to underscore the point that regardless of what you may think of him as a person, as a footballer he must be respected.

Despite the negative headlines, Chelsea are likely to benefit from an under-siege John Terry, and England will also benefit from a charged up captain determined to prove that he’s still the best. So regardless of the questions made over his footballing ability, the fact is that if Terry is picked for the Euros, the press uproar will be good enough for him to raise his game to a sufficiently high level.

So now it comes to what impact his presence would have on the rest of the England squad. Before I answer that, consider the key influences in the England squad – Terry, Ashley Cole, Wayne Rooney, Rio Ferdinand, Gareth Barry, and recently Joe Hart (you can include Lampard and Gerrard in that list too). Rio’s injuries mean that he’s no longer first-choice for England, and all of the other players in the above list are generally close pals of John Terry.

You only have to look at Capello’s reinstatement of John Terry as captain to understand the support he has inside the team – with Rio’s injuries making him unavailable (ditto with Gerrard), the first choice for captain was Terry. With Rooney biding his time until the seniors retire, there are hardly any players in the England squad who would be both central to England’s chances in the Euros and would be opposed to John Terry being in the England squad.

So at the end of the day, Capello and the FA have a simple choice – they can take the moral ground, or they can put the squad first and value performances over everything else. We keep lambasting the FA for bowing down to the press and not making the right choice. This is the rare moment when (so far) they’ve stood firm against public outcry. It might not be the right thing to do, but it may actually help England’s performances at the Euros.