What Joachim Low has done in four years since taking over the reins of one of the biggest jobs in world football is nothing short of wonderful.The German head coach succeeded a legend of the game Jurgen Klinsmann after the 2006 FIFA World Cup where they narrowly missed out on reaching the final in their own back yard to a resolute Italian side under the leadership of Marcello Lippi. With such a vast figure of German football stepping down Klinsmann handed over the baton to his assistant, Joachim Low.

Low was a novice to the management trade. Unlike his predecessor he didn’t achieve anywhere near what Klinsmann did during his playing career. He was left merely with a below average career and didn’t really establish himself in a team until his later years in 1985 where he joined Freiburg. As Klinsmann lifted the World Cup in Rome in 1990 Low was ending his career in Switzerland. Nevertheless it is pretty evident that to succeed in management you do not need to have a glittering CV. Just ask Jose Mourinho. The Portuguese tactician is now a blueprint for all aspiring coaches.

‘Jogi’ as he is commonly known as by his peers always maintained his desire to continue the Klinsmann philosophy under his stewardship. The Germans success in 2006 was accustomed by high quality technical football. Their organisation like all German teams in the past was efficiently drilled with all ten outfield players carrying out the duty in a professional manner. Nothing we don’t expect from a German team.  His success was instant. Following four successive victories at the very start of his leadership he cemented a piece of history by delivering the best start by a German national manager ever.

Aided by his assistant Hans-Dieter Flick, the two have become renowned for their matching attire whilst side by side in the dugout but their intelligence as a coaching partnership has benefited the German side dearly.

As they aimed to qualify for the European Championships in 2008 they did it with relative ease.  They made it all the way to the final in 2008 where they were narrowly beaten by a Spain side spearheaded by Fernando Torres. The Germans may have been beaten but they proved once again just how much of a dominant force they are in the world game. Whenever the face adversity and criticism they always quash their doubters with latter stage appearances and honours. They are a football marvel.

Low’s maturity as a coach was becoming more and more evident. In his debut tournament he had guided his country to the final of one of international footballs most competitive tournaments. Blending experience with youth the Germans looked a well oiled machine despite a few blips such as the 2-1 defeat to Croatia in the group stage and ‘Jogi’ being sent off from the touchline against one of the hosts Austria. Germany was very unfortunate not to win the whole thing but came unstuck against a Spanish side that were beginning to introduce their affiliation of total football.

With the World Cup in South Africa on the horizon not much was expected from Germany. Very unusual for a national team with so much prestige and pedigree but the likes of Brazil, Spain and England were foreseen as the dominant forces to take the tournament by storm. The Germans quietly went about the business in qualification which saw them tally up 26 points which included eight wins and two draws. They qualified for South Africa unbeaten in a group that included Guus Hiddink’s Russia. Travelling to Moscow is no easy feat by any stretch of the imagination (Just ask the English).

Their build up to the finals was hampered with a number of injuries to key personnel. Talisman and Captain Michael Ballack saw his prospects of competing in his final tournament dashed after damaging his ankle in the FA Cup Final with Chelsea. Ironically the injury was caused by a player with German decent, Kevin Prince Boateng, who was vilified in Germany for his robust challenge. Simon Rofles and Heiko Westermann also failed to make the final twenty-three with their respective injuries. Rofles had knee surgery but effectively ruled himself out of Joachim Low’s plans as he wouldn’t be fit come the summer. Westermann also went under the knife at the turn of the year to cure his problem with his knee. He got back to full match fitness but his luck was compounded last week as he broke a bone in his foot against Hungary in Budapest in friendly just weeks before the start of the finals.

Low had a big decision to make by naming his new skipper. Phillip Lahm who has been an integral part of the German setup for many years now was handed the armband. The job he has done so far in the tournament has been fantastic. It is not easy for a wing back to dish out orders and advice but as he is now one of the older members of the side, at just 25 years of age, he is accompanied in a team which is littered with youthful exuberance. It seems as if he is looked up to within the camp. 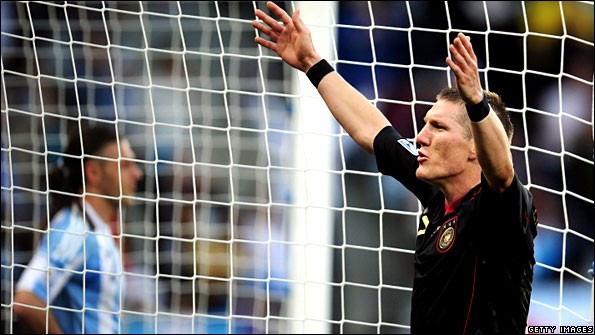 Michael Ballack’s absence was seen as a real hammer blow. A true German winner with a vast presence in the heart of the midfield. His exclusion could have ended any German hopes.  Joachim Low however changed the German mentality when he said:

“Bastian Schweinsteiger, on the pitch, will play the role of Ballack and interpret in his way while Philipp Lahm will become captain.”

Bastian Schweinsteiger who has been one of the players of the tournament thus far was given the task of filling Michael Ballack’s boots. Very big boots to fill indeed, but he hasn’t just filled them, he now owns them. His instrumental architectural play in the German midfield has been excellent. He has helped aid the German front three of Lukas Podolski, Miroslav Klose and Thomas Muller with his wide range of attributes which includes his delightful passing and hawk like vision. He looks so accomplished on the ball and can terrorise defences with his burst of pace and footwork. His performance against Argentina was possibly the stand out showcase of the finals so far. Joachim Low has shown just how much of a top class tactician he is with just that one solidarity move. Ballack has been marvellous for Germany for many years and his absence was sorely missed. However any German fan will now tell you as they gear up for yet another World Cup semi-final, it may have been a blessing in disguise. In fact it was just a blessing all together.

They have coasted their way to the last four despite a 1-0 loss against Serbia where Klose was dubiously sent off for two lacklustre cautions and a nitty-gritty performance against Ghana in the group stage. They crushed Australia in their opening game where their technical flair and prowess was brought under the spotlight. They were fantastic in that game.

However nothing could prepare the German faithful for what they were about to witness. They crushed both England and Argentina convincingly with a 4-1 and 4-0 victory back to back. To put it into context just look at the score lines; Germany 4 – 1 England, Germany 4 – 0 Argentina. Two football superpowers swept aside so convincingly by a team that wasn’t even tipped to accomplish anything within this tournament. Yes England may not have been the team everyone thought they would but to defeat them so convincingly and with such little ease shocked the world of football. England’s back four couldn’t live with the front three of Muller, Klose and Podolski with Ozil and Schweinsteiger pulling the strings just behind.

The victory over Argentina however was the most impressive. Diego Maradona’s men had been in stunning form during the competition playing some of the most beautiful football throughout with Lionel Messi orchestrating their dominance. However he was stifled throughout the game as Germany restricted his play. By doing this the Barcelona man had to come in deep and try to influence the game but it had little effect. An early goal from Thomas Muller via a set piece set the tone for the game as they controlled it from there on in. It was unbelievable just how convincing they were. This German team seems to be maturing all the time despite their young age.

Mesut Ozil at just 21 years of age looks like a world beater at the moment. Not much was known of the Turkish born star prior to the finals but he is now establishing himself as one of the most exciting prospects in world football. He has been superb. Once again Joachim Low must be praised for the faith he has shown in his youngsters. Ozil only made his debut last February and is now an integral part of the setup.

Thomas Muller has also been unbelievable. He is now establishing his credentials on the world stage as he looks to be getting stronger and stronger alongside Klose and Podolski. At 20 years of age it is marvellous at just how mature and intelligent he is. This German side has that in abundance all over the pitch and its Low’s man management which is influencing all this.

The win over Argentina in such a manner has sent ripples throughout the world. To defeat a football superpower in such a way is astonishing. Low got his tactics spot on by restricting their forward play and exploiting their weaknesses at the back.

Now with Spain in their way can this young German side go one step further and beat possibly the most spectacular passing team in International football? Why not? Argentina plays a similar tempo to that of the Spaniards and Low’s team were able to restrict their passage of play. They have to be wary of David Villa. The new man at Barcelona has lit up the tournament with his predatory instincts in front of goal. After having such as fantastic Euro 2008 he will be itching to follow up that success with a World Cup winner’s medal.

Low will be wary of the talent Spain possesses. He has already proved just how good of a coach he is with his intelligence and astute tactics. Whatever does happen in Durban the 50 year old along with his players can be so proud of themselves. They have been by far the most impressive side out of all the thirty-two teams by playing some of the most attractive football which would whet the appetite of any football poet.