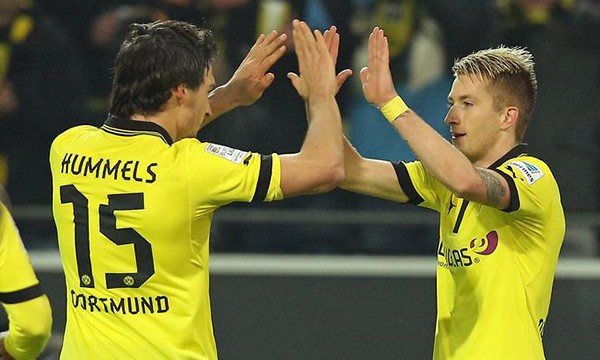 Borussia Dortmund have had a tough season in the Bundesliga and several top players are expected to leave the club next summer. Rhys Turrell of The Daily Star claims Arsene Wenger is plotting a double raid on Borussia Dortmund duo – Matts Hummels and Ilkay Gundogan, both will collectively cost around £55m.

Hummels, who is also a reported Manchester United target, will cost around £35m, while German midfield Gundogan can expect to command a fee in the region of £20m.

The world-cup winning defender has revealed recently that he has had offers from various top clubs, but at this moment, he has no plans to leave Germany.

“I have always decided not to leave. I think I have made some good decisions and I want to make those in the future as well,” he said

“But I have stayed until today. I will stick to my way of not promising anything and maybe leave someday instead of saying I will stay forever and then leave all of a sudden.

“I am not really known as a globetrotter. I have been with two clubs in 26 years. Loyalty is important to me.”

In modern day football, loyalty hardly means anything. Footballers are professionals and they have every right to play for any club that pays him more. Hummels is a world class defender and he will be in demand come July-August.

It’s going to be a right kick in the teeth when Hummels joins Arsenal in the summer.

Arsenal will be one of those four-or-five clubs that could be interested in the German defender and the Gunners will face severe competitions from other heavy weights, but having already secured German superstar Mesut Ozil for a huge transfer fee, can anyone really rule them out of the race? Probably not.

Gundogan’s case is a bit different. He is another highly rated stylish midfielder but will top clubs want to take a gamble on him knowing his injury records?

Serie A giants Palermo claim they have rejected interest from Manchester United for their 21-year-old star Paulo Dybala, who is often compared with Sergio Aguero. Taken from Press Association, via The Guardian:

But the Italian club’s president, Maurizio Zamparini, says he is willing to talk again in the summer about the Argentinian, who has scored nine goals in 17 appearances this season.

“Dybala is worth over €40m [£31m] but I won’t sell him until June,” Zamparini told Radio Due. “Many foreign clubs asked after him, including Manchester United. I told the English side that he is not for sale right now, but we can talk about it again in six months. In my view, he is the best striker in Europe at the moment.”

Palermo signed Dybala from the Argentinian club Instituto for £9m in 2012. Afterwards Zamparini described him as “the new Sergio Agüero”.

The Argentine striker has become the latest sensation in Serie A after his outstanding form and meteoric rise to stardom has caught the attention of several European heavyweights.

Palermo president Zamparini talking in 3rd person:”No one has made a direct offer for Dybala, because people know how tough Zamparini is”

Sport Witness has explained in their article that there is no talks of ‘bid’ as yet, but the clubs have merely shown an interest in the player, which is obvious.

Liverpool & Chelsea boosted in the race for Reus

It seems like Borussia Dortmund are already planning for life after Marco Reus, after CEO Hans-Joachim Watzke admitted they would be powerless to keep him at the club, if he decided to move on.

Liverpool and Chelsea are thought to be interested in Reus, as per Joe Short of The Express, and such comments would likely to boost their hopes of signing him in summer.

Dortmund probably will not sell Reus in January, but they could be powerless to prevent him for going elsewhere in summer. In case Real Madrid pops up with an offer, Premier League clubs can easily forget about landing Reus, otherwise, Chelsea have a better chance of landing the German star. Liverpool could be in the running, provided they have Champions League to offer.