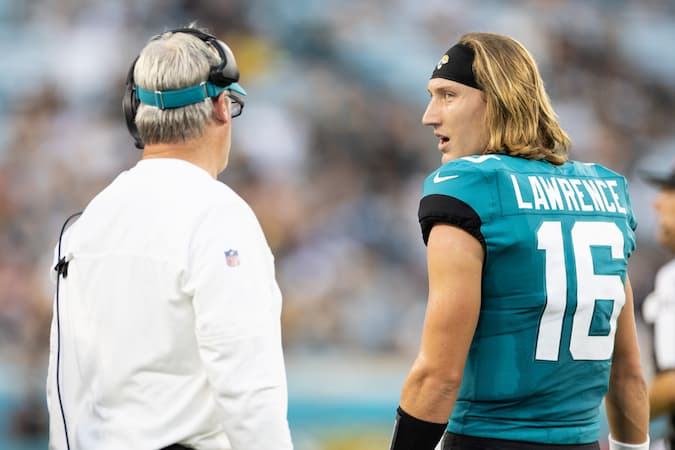 After a fairly positive start to the NFL season, the Jacksonville Jaguars and Trevor Lawrence came up short against the undefeated Philadelphia Eagles.

It was horrendous conditions in the rain-soaked Philly, and it did no favours for Lawrence. He turned over the ball five times, and had four fumbles in the 29-21 loss.

According to NFL Research, the four fumbles from Lawrence was the most lost in a game by any player since 1991.

Coach Doug Pederson was sure Sunday’s outing was just simply an off day for the young quarterback.

“Let’s hope it’s a blip,” Pederson said, “I don’t think it’s a setback. I think it’s a blip. You hate to say it, but maybe it’s one of those games in the season where nothing goes right. It happens. I never make excuses. We have to do a better job of hanging onto the football. He knows that. That’s the prize possession out of there. If we make plays that were left on the field, it might be a different outcome today.”

Other than the turnovers, Lawrence also struggled to make passes in the rain, finishing 11-of-23 passing for 174 yards, two touchdowns and an interception.

Hey guys. Trevor Lawrence is allowed to have a bad game. Just an FYI.

It’s a simple case of putting it behind themselves, and if they move on from this, there’s no doubt that Pederson’s side will still be in contention throughout the season.