Jackson Martinez, the highly rated Porto striker, who has been linked with a move to several top European clubs including Manchester United, AC Milan and Valencia, has said he admires Arsenal legend Thierry Henry and spoke about his ‘dream’ to play for a big European club.

Portugal media have been feeding us the information for a while that Martinez, who has a reported release clause of €35m, is certain to leave the club in the summer.

Italian giants AC Milan were thought to be leading the race for his signature, but the player himself has admitted that he wants to play in the Premier League or La Liga. Earlier this week A Bola claimed that Manchester United and Arsenal are showing a keen interest in him, with both the clubs ready to pay his release clause.

Arsenal club legend Thierry Henry praised in an interview recently saying he would be a good signing for the Gunners. Martinez says he is happy to have receive such a big compliment from a great player. 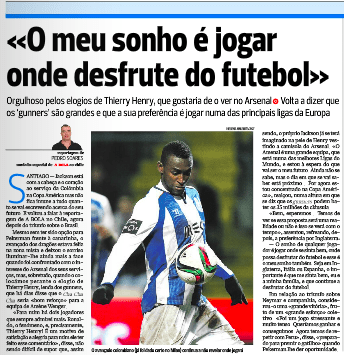 “I’ve always had two players I’ve admired above all others: (Luis) Ronaldo and Henry. So I’m very happy he made that comment about me,” he said in an interview to A Bola.

“Arsenal are a great team, playing in one of the best leagues in the world. I’m still waiting to see what the future holds. It’s not known yet but it will be known soon. For now I’m fully focused in the Copa America.”

“Every player’s dream is to play where they can feel well and enjoy football, and that’s my dream too. Whether it’s in England, Italy or Spain, the most important thing is that my family and I both feel well and I can enjoy my football.”

He said recently that he is ‘as close to Milan as to some other clubs’, which means there hasn’t been any deal agreed contrary to reports in Italy. In fact, he feels he is in the mixed zone at the moment, with plenty of offers to chose from, but has assured his fans that he would sort his future within next few weeks, mainly after the Copa America.

Martinez would be a good signing for Arsenal. He has scored over 90 goals in the past three seasons and he is just the type of striker the Gunners need to mount a serious challenge for the title. But will Arsenal pay such a high transfer fee for the 28-year-old striker?