From Italy: Arsenal target on the verge of joining Juventus

Italian newspaper Tuttosport have claimed that real Madrid youngster Alvaro Morata who is also an Arsenal transfer target is set to join Serie A Champions Juventus in the summer. TMW have also relayed the story claiming the deal is almost on the verge of completion.

Here is a snippet of the front page of Tuttosport from yesterday. 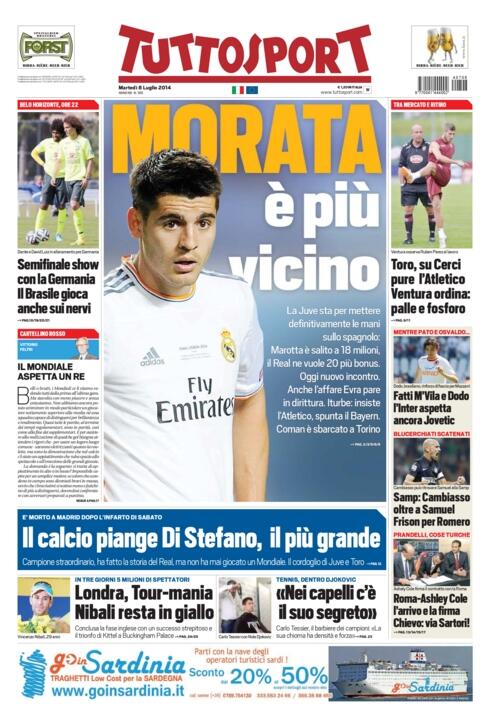 Juventus had earlier offered €15m but were later asked to increase their bid is they were to finsih off teh deal quickly. It is now believed that the Bianconeri will pay anything in between €20m-€22m to acquire the services of the youngster till 2018 but there is set to be a repurchase option for Real which means that the Los Blancos will have to shell out around €30m to get the player back to Bernebeu.

Morata has been a long term Arsenal target with the Gunners boss Arsene Wenger in the market for a striker who could take the pressure off Olivier Giroud up front. However, the player is willing to move only to Turin and will now sign a package worth around a net salary of €2.2 m per year.

What does this mean for Arsenal: It appears as if Wenger wanted to buy the player outright but later pulled out due to Real’s insistence on putting a buy back clause on the agreement.