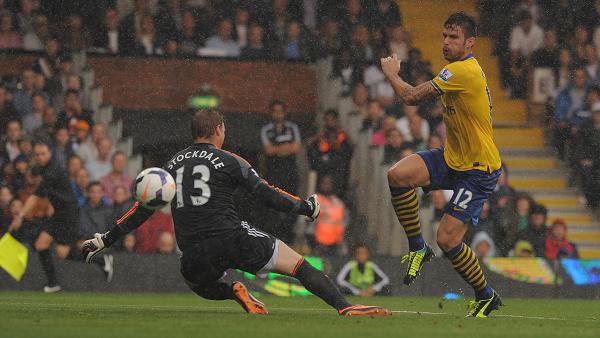 Both goals he has scored in the Premier League this season have been typical poacher’s goals, but have also required quick reactions and ingenuity – two things the France international was lacking in his debut season for the London outfit.

His first goal of the 2013/14 season came against Aston Villa, and was a clever finish from close-range after Theo Walcott crossed in from out-wide. His most-recent goal came after a mis-hit shot was controlled by Giroud – who then chipped it past the hapless Stockdale in goal for Fulham.

His good start to the campaign is hardly a surprise for many tracking his progress with Arsenal. Giroud was the side’s top-scorer during their pre-season tour and in all of their friendlies. He’s been backed by his teammates to have an even better return of goals than last season’s 17 from 47 games for the Gunners.

For France, his record is far from impressive – 20 caps, 3 goals. However, the 26-year old is eyeing a place in the squad for the 2014 World Cup next summer, and is currently playing his way into a call-up if he can continue his form.

All the talk has been how Arsenal need a striker in the squad, but Giroud is certainly making a case to the contrary. Manager Arsene Wenger has come under unfair amounts of criticism for sticking with his trusted players, but wins in the Champions League and Premier League have proven he’s right to keep his faith in his squad.

Giroud is starting to look a player worthy of his £11M price tag, and this season could well propel him for the world stage.