Arsenal have the opportunity to go level on points with second-place Manchester City with the first of their two games in hand on the former Premier League champions.

At the other end of the table, Hull City are only one point above the drop zone following wins for Aston Villa, Leicester City and Sunderland over the weekend. Sunderland will have a game in hand on Steve Bruce’s side after tonight’s game, but that too will be against Arsenal.

The Gunners are the Premier League’s form team with eight wins and a draw in their last nine games. The home side ended their recent poor run of form with back-to-back wins over Crystal Palace and Liverpool ahead of Monday night football.

Centre-back Curtis Davies is out with a thigh injury but Andy Robertson could return from the ankle injury that has kept him sidelined for more than a month.

Mohamed Diamé has seen little action since December due to a knee injury but could also be available to Steve Bruce this evening.

Nikica Jelavić has missed the last five games with a knee injury but could be available this evening. It would an added boost, although Dame N’Doye has proven a good threat up since he move from Russia in January.

Mathieu Debuchy is a doubt at right-back so Héctor Bellerín can continue where he has played for most of the New Year.

Mikel Arteta is still lacking match fitness to be in contention whilst Alex Oxlade-Chamberlain continues to be struck by a hamstring injury. 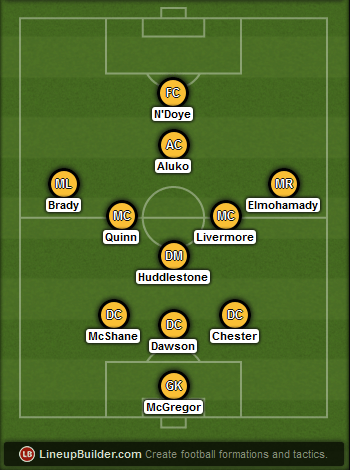 Steve Bruce plays a 3-5-1-1 formation with wing backs. Sone Aluko is the pacey forward in behind Dame N’Doye who will be looking to cause problems for the Arsenal defence on the counter-attack. Ahmed Elmohamady puts in a number of crosses per game from the right and Robbie Brady does similar from the left – otherwise there is a lack of creativity in the team. Tom Huddlestone attempts the odd long-range shot but otherwise they are reliant on their two attacks, and set pieces for attempts on goal. 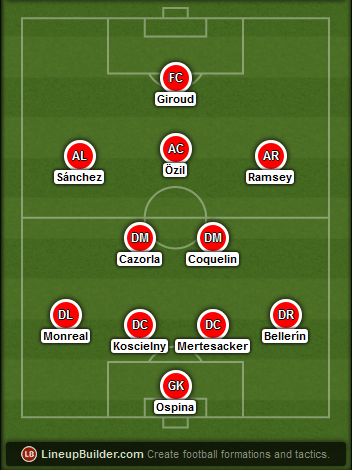 Arsenal can be expected to stick with their 4-2-3-1 formation with Santi Cazorla being a deep-lying playmaker who dictates the game with his possession. Alexis Sánchez has been quiet in the second half of the season compared to the first but should be expected to be heavily involved in the action at the KC Stadium. With Hull playing three centre-backs and three central midfielders, Arsenal will probably look to the wings and overlapping runs from the full-backs to create chances for Olivier Giroud and co in this match.

Alexis Sánchez vs Ahmed Elmohamady
The Hull City right wingback loves to bomb on and join in with the attacks but he’ll have to be careful in this one not to leave Alexis Sánchez free space on the counter-attack. Expect the Egyptian to have support from either Jake Livermore or James Chester when he gets around the 18-yard box as the Chilean draws additional attention from Hull’s defence that should free up some of his teammates. Sánchez record a goal and an assist in the 2-2 draw at the Emirates earlier this season.

Olivier Giroud vs Hull’s defence
We think Arsenal’s best attacks will come from out wide when they force the Hull defence to spread out. Particularly on the left as Aaron Ramsey tends to drift in from the right wing. Olivier Giroud can therefore expect to see a lot of crosses in this match. If his wide teammates are drawing centre-backs and holding midfielders out of position then there’s a chance the French striker will find space and goalscoring opportunities.

Santi Cazorla vs Jake Livermore
Arsenal’s Spanish playmaker could find himself crowded out by Hull’s three central midfielders this evening but often this season he’s found a way to make things happen. Don’t be surprised if Santi Cazorla controls the game in midfield with both his passing and dribbling ability. He has the skills to make a man miss and buy himself time which could be all he needs to play the likes of Sánchez, Giroud and Ramsey in on goal.

6 – Olivier Giroud has scored six goals in his last seven Premier League matches away from the Emirates.

13 – David Ospina has not conceded a single goal in the first half of any of his 13 Premier League matches.