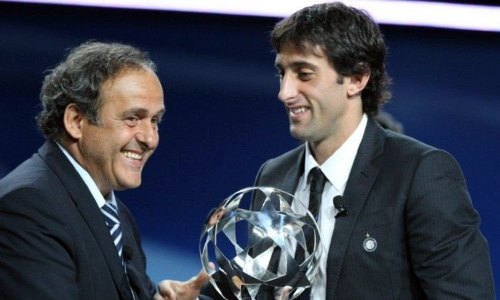 What a year it has been for Diego Milito. He finally achieved a big money move to one of Europe’s elite after impressive spells at Real Zaragoza and Genoa. Not only that he embarked on a campaign that will be forever etched into Inter’s history where he gave a vast contribution that was subsequently littered with honours and accolades – and yet FIFA have chosen to ignore of all this and focus primarily on performers at the World Cup.

No one ever questioned his ability upon his move to the San Siro. A season prior he had been scoring freely for mid-table Genoa. He came second in the capocannonieri – a goal shy of winner Zlatan Ibrahimovich who bagged 25 goals.

The true question was could he now live up to the billing at a huge football club? Milito not only proved that he could but he also proved to be an invaluable commodity for his new employers.

The contribution the Argentine had made was staggering. Had it not been for his goals – and at critical periods of the season, whose to say the Nerazzurri would have clinched the treble? A total of 30 goals in 51 appearances speaks volumes.

His form in particular at the most crucial stage of the season is what made him stood out above the rest. He netted the winner against Roma in the Coppa Italia final along with the goal against Siena on the final day of the season to clinch their 18th Scudetto.

If that wasn’t enough he bagged a brace against Bayern Munich in the Champions League final to see Inter’s name engraved on the European Cup for a third time. Not only did he write a new page in the club’s storied legacy but he cemented his name in the club’s DNA. He will be forever known by those affiliated with il serpente as the man who netted the crucial goals for captain Javier Zanetti to lift the coveted cup.

UEFA clearly realised his involvement in the Champions League and therefore awarded him with the ‘UEFA Club Forward of the Year’ award along with the’ UEFA Club Football of the Year’ – basically naming him as the top-man from all those who adorned shirts of the thirty-two competing sides.

He has won absolutely everything there is to win and yet he has been overlooked. What has counted against him is his lack of involvement during Argentina’s World Cup. A number of cameo appearances and becoming a constant figure on the bench has seriously deterred any hope that he may have had – at least – being on the short-list.

Asamoah Gyan  who was marvellous for his country in South Africa has been awarded with the inclusion of his name along with the other 22 nominees – but yet he failed to achieve anything significant with his club Rennes – unlike the might of Milito. This isn’t being disrespectful to Gyan but when you look at the bigger picture it seems as if those who performed at the World Cup have been prioritised.

It is desperately disappointing for such a star of 2010 to be overlooked by the hierarchy of football. Surely questions must have been raised over his involvement as the shortlist was conjured up?

His former club Genoa gave their support to the Inter man believing its an injustice. A statement on their official website said it all.

“An injustice has been done. Diego Milito has not been included in the 23 candidates for the Ballon d’Or.”

“It is a serious error, if you consider the role Il Principe di Bernal had in winning the Scudetto, but most of all the Champions League for Inter.”

“The only mitigating factor, which was not enough of a reason, was at the showcase of the World Cup he mainly observed from the bench.”

At least he knows he’s a hero in the eyes of those who matter to him.