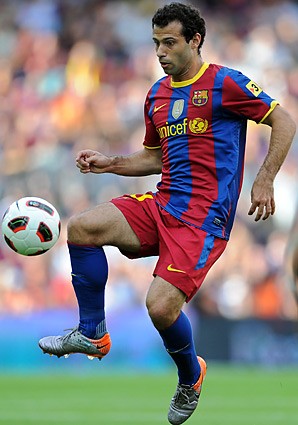 Is what I hear someone in my head saying. Barcelona are the most attacking side in world football. They have scored seventy eight goals in twenty seven games in La Liga. Lionel Messi plays for them, and has twenty seven goals and fifteen assists from twenty four appearances.

When they play in the second leg of the champions league second round on Tuesday the 8th of March, they will be playing at home, roared on by ninety, thousand, people. Playing Arsenal, who will be bereft of Alex Song and relying on a defence which, lets be honest, is not one people casually bet on to keep a clean sheet against a Roy Hodgson Liverpool, let alone… it’s insane. Madness to think that rather then go all gung ho on Wenger’s gunners, they will instead play cautiously.

To which I would say, there is nothing to lose then from telling you why Barcelona might use a 3-3-2-2 formation then.

Of course this idea does have basis. I have certainly not been told this formation that Guardiola might use by my invisible friend Herbert, who sits in a cupboard eating chocolate and watching sky sports all day. Because this is no ordinary game, and this is no ordinary opposition. Barcelona have plenty to consider in preparation for what could be a very, very tricky ninety minutes for them tomorrow.

Guardiola and co have been burned before.

While Barcelona are generally considered to be the best team in Europe by a mile (No, Inter Milan. Just no.) there have been moments in which they have had difficulty in the past few years. If anything, Arsenal have been a bit of a thorn in Barcelona’s side. (More then the solid majority of teams anyway.) The Gunners drew 2-2 with Barcelona last year at the emirates, had the audacity to score against the Catalan side at Camp Nou before being destroyed by Messi, and a matter of weeks ago did even better in recording a 2-1 win over Barcelona at the emirates. Something Barcelona could just ignore and call a one off if Arsenal hadn’t managed to put the scares on Barcelona (briefly) three times in a year.

No, Arsenal are not the run of the mill cattle Barcelona slaughter. They are technically able, know plenty about passing under pressure and are perfectly capable of cutting any defence to shreds. Considering Barcelona have a goal deposit to reverse, it would do Barcelona well to remember that Arsenal have very sharp teeth. Which is why the Catalan defence coming into this fixture is even more of a worry…

Usually, Barcelona wouldn’t care. In general, no opposition really get close enough to Barcelona’s defence to worry it as such, but Arsenal do, and in the last game they did it just as regularly as Barcelona. Not only were they able to nullify Barcelona to an extent, but they also exploited the large sections of space that as the game wore on increasingly opened up behind Maxwell and Alves, as a one of Barcelona’s key methods of attack became their downfall.

Worse for Barcelona, in a game where two goals for Arsenal would probably put Barcelona out their defence is looking very, very threadbare. Puyol is indeed out according to the pre game press conference, and Pique is ruled out by a suspension in the last leg – leaving Milito and Abidahl to form a suspect partnership, for a team of Barcelona’s standing.  So Arsenal can attack and score goals where Barcelona, if they aren’t careful, could find themselves tiring again – leaving the men at the back exposed.

Alright then, how does the formation work?

Well, Barcelona have played this formation before. In fact, they played it mid week briefly, against Valencia. And while Barcelona then changed their formation back in order to beat Valencia, the original system does have merit for use against Arsenal. Firstly, because of the more solid base. Because Arsenal could break into the space behind the wing backs more and more and launch attacks against an undermanned Barcelona back line.

Moreover, Arsenal could break into the space between Barcelona’s midfield and defence and create chances for themselves. The goals Arsenal scored came from a mix of these things – Clichy’s excellent ball to Van Persie from the wing, and Arshavin arriving behind the defence completely unmarked as Arsenal broke away. The addition of Mascherano, who has previous experience playing Arsenal, could be vital to Barcelona keeping their defence solid.

Yes, Mascherano has had a less then impressive career for Barcelona so far – appearing in arguably some of Barcelona’s worst performances of the season. But his energy could be vital to covering the gaps Arsenal will try to exploit. He can snuff out midfield runs, help the left and right centre backs against attacks launched from the wing and in general, prove a barrier against the Arsenal attacks seeking to break through Barca for the key goal.

Of course in this picture, it is still very much four against four – with Fabregas potentially steaming forward or even Wilshere it still leaves the defence looking creaky. But then you can take into account that a lot of the time there will still be one of Alves or Maxwell back or at least haring back to support the defence. Added to that Barcelona’s likely domination of the ball and lo and behold, the addition of Mascherano makes Barcelona’s defence look a lot less potentially leaky.

But then of course, Barcelona have to get a goal, and that very fact alone still makes the idea of playing this formation a little mad. Or so you think.

Who wants to take on Messi one on one?

But while this somewhat odd looking defence of Barca’s is battling away against Arsenal’s attackers, Barca’s wing backs are free to attack Arsenal’s back line, obviously. They can get at Arsenal’s wing backs, interact with the forwards, and so on. Again, obvious. What isn’t so obvious is what would happen if Barcelona could work a situation in which both their wing backs are forward at the same time.

Suddenly, the match becomes a series of mini duels. Maxwell against  Sagna, interesting. Alves against Clichy, sure to be a test for Clichy. Wilshere against Xavi – well Wilshere showed what he could do last time these two teams met. Diaby against Iniesta – On a good day Diaby is a stern test for anyone. But then you come to the back like. Djourou against Villa and Koscielny against Messi.

That, Arsenal would not like one bit. One wrong move from either defender and Arsenal could find themselves 1-0 down at the Nou Camp, and very much up against it. And with those two strikers against those two defenders, sparks could really fly.

Of course Wilshere and Diaby can drop off if they wish and help out the defenders, but that would invariably leave either Xavi or Iniesta free to dictate the play as they choose, invariably leaving Arsenal in a spot of bother anyway.

Or of course Bendtner and Nasri could track back relentlessly or jut stay deep with Alves and Maxwell – leaving Chamakh notable for his heading ability miles away from goal with a three man defence and Mascherano who will quite happily play a high line and force Chamakh back up the pitch. Either way, Arsenal would be leaving themselves having to defend for their lives (Which everyone knows they can’t really do) or relying on Koscielny and Djourou to have the best games they will ever, ever have and snuff Villa and Messi out.

Let’s be honest here, either way Arsenal are a bit screwed.

On the other hand if Barcelona play their usual formation Arsenal can break at them far more easily – attacking what would essentially be at times the two central defenders and Busquets with lots of possible Arsenal attackers. And while Barcelona do need to score goals, it doesn’t help them to have Arsenal getting them as well.

Thus, this crazy formation could well be the way in which Barcelona win this tie. OK, I may have lied a bit in the title. It’s not a defensive Barcelona side as such – it’s still very attacking, but the side is shorn of Pedro, ever a very effective player for Barcelona. Plus, two defensive midfielders. Still, not the side that blows away everyone in europe? Crazy old Barcelona.

Or perhaps, you never know, not so crazy after all.