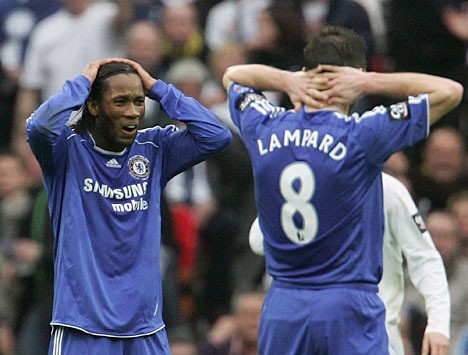 The pressure for new players to make instant impacts for big clubs, like Chelsea, is unquestionable. Whilst trying to impress the new manager, players and club supporters, players are always judged harshly by the English press; particularly when they have a large price-tag on them.

The reactions to Ramires, Zhirkov and Kakuta have displayed just how difficult it can be for players to establish themselves in the English Champions’ side. Ramires has come under real pressure from the press and the influenced supporters since his arrival; Zhirkov been through stages of excellence (like now) but is still a very long way from being a fans-favourite; Gael Kakuta had a disappointing first Premier League start against Aston Villa and you can sense the premature unease of some Chelsea supporters already.

The press love to write about underperforming players, opposing fans love to make the most of this and, consequently, it becomes an issue to the club supporters and the player will be affected by this. However legitimate the criticism can be the best thing to do is to ignore it. A lot of players struggle when they first come to a big club in the Premier League. Given time and patience these players can blossom into world-class players, as has been demonstrated in the list below.

Florent Malouda was first brought to London, in 2007, from France and there was high expectation on him. Drogba and Essien had previously come from France and were, by now, a pair of Chelsea’s best-performing players. Despite scoring on his Premier League debut, Malouda failed to make a real impact until the back-end of the 2008-09 season. Malouda is now in his prime and  has scored 6 Premier League goals in 6 starts.

Branislav Ivanovic was purchased for around £10 million in January 2008 and it took him 8 months to make his Chelsea debut. It took him until the end of that season to make a name for himself, and his two goals at Anfield seemed likely to be the only highlight of his Chelsea career. However; when Jose Bosingwa was injured a year ago, Ivanovic was trusted with his place in the side and he may prove difficult to displace for Bosingwa. By the end of last season he was in the Premier League team of the season for his impressive and consistent displays for Chelsea.

John Obi Mikel was an instant hit with Chelsea supporters because he had forcefully snubbed Manchester United for Chelsea. His performances, though, have been very ropey over the years and he also gained an early reputation for being sent-off. He has gotten gradually better despite a lot of frustrated groans from the Stamford Bridge crowd over the years and is now playing consistently well. Peaking under Scolari were his wayward short passes; nowadays he has a very high pass completion rate and has an increasingly good eye for long balls.

Didier Drogba has never been a bad player for Chelsea, but, after being bought for £24 million, was a disappointment for a couple of seasons.  In his third season for Chelsea, however, he finally reached a 20-goal league season. His next two seasons were ruined by injury but did show glimpses of the brilliance that helped him claim the Premier League golden boot award in 2007. His absolute potential was realised last season when he scored nearly 40 goals and he looks capable more than capable of bettering that this season.

Frank Lampard holds so many records at Chelsea Football Club and he is the best example of why supporters should be patient with underperforming players. Chelsea were not nearly as big as they are today when Lampard signed for Chelsea in 2001, but the £11 million price-tag was perhaps the reason that it took him time to adapt to life at Stamford Bridge. He got gradually better for Chelsea but it took time. The Lampard of 2001 would, undoubtedly, have struggled to get into the Chelsea of the present day.

Of course supporters want their team to do well but it is necessary to be patient with new signings. We must accept how difficult it is to play in the Premier League and how overwhelming it can be to come into a team like Chelsea for an expensive fee.

Zhirkov, Ramires and Kakuta have a lot of potential and could, if given confidence and tolerance be as successful as these five players who had difficult starts to their Chelsea careers.