Has Cristiano Ronaldo evolved too far? 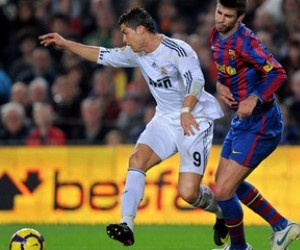 The debate about who is the world’s greatest player has revolved for nearly five years now around two names: Barcelona’s Lionel Messi and Cristiano Ronaldo, who now leads the line at Real Madrid after emerging as a tricksy winger at Manchester United. Only two other names are mentioned: Messi’s Barca teammates Xavi and Andres Iniesta. Opinion is divided on the subject, often down party/club lines. But our recent spate of Clasicos may have provided us with an ultimate answer.

While overshadowed by Jose Mourinho’s manic rants, Pepe’s debatable red card and Messi’s magical goals, Cristiano Ronaldo toiled like a workman in his role as Real’s forward fulcrum. He was effective in the second match – scoring the deciding header from Angel Di Maria’s cross – but as the third match devolved into a shouting match and the fourth saw Real’s Champions’ League hopes fade as Javier Mascherano theatrically won a free kick outside his area, Ronaldo’s penchant for forward play was thrown into sharp relief.

Cristiano Ronaldo, deservedly, is the focus of most of Real’s attacking verve as he’s their best player. According to ESPN Soccernet he’s scored a remarkable 42 goals on the season, created a further twelve – scoring or creating 43.2% of all his club’s goals this term. Since he arrived at Carrington in 2003, he and his game have evolved a remarkable amount. He started at United as a wide forward with exceedingly tricky feet and a thunderous shot.

Now, Cristiano Ronaldo has evolved into the all-purpose forward: he’s tall enough and good enough in the air to act as a target man, has the same remarkable footskills as when he arrived, and his neck musculature must be seen (and gawked at) to be believed. He delivers “bullet headers” like almost no-one else. Physically, there may not ever have been a more perfect footballing specimen.

These qualities allowed him to become the centrepiece of a United squad which bullied the Premiership for three years before departing for pastures blanco. Now on the other side of the fence he has dominated La Liga, much like Messi has from Catalonia. But, since his evolution into such a dominating forward force, in the most important games he has yet to take the game consistently by the throat. His recent big match performances have been consistently solid and workmanlike, rather than those blistering games which Messi has so recently delivered.

It is obviously extraordinarily harsh and incorrect to suggest that United’s, and now Real’s failures lie at the feet of the Varnished One. When competing against Barcelona, very few clubs are able to cope and eleven players maketh a team, not one. He hasn’t been positioned as well as Messi – having players nearly, but not quite the same calibre as an Iniesta or Xavi. Tactically also, los Merengues have been set up to counterstrike, as is coach Jose Mourinho’s wont – a position which rankles football’s most expensive player.

But given his dominance both United and Real have been built around him, rather than his slotting in to upgrade a position. This isn’t meant to be criticism – if anything, it’s a compliment as very few athletes are able to walk into such a large club and have their skills demand the club be shaped around them. While both he and Messi are essentially now forwards without strict positional definition, you Messi would fit into any team in the world without that squad having to remodel around him. With Ronaldo, that’s not the case.

One example of this reshuffling – an on-the-fly job, even -which easily springs to mind was during his last match in a Red Devil shirt: the 2009 Champions’ League final which saw Wayne Rooney shunted out to the left so Ronaldo could weave his magic down the centre. Where each had come to United to play one position, Cristiano Ronaldo’s skills grew so much that on the biggest stage, his game forced Sir Alex Ferguson into making a tactical decision (again, an understandable one given Ronaldo’s scoring prowess) where he and Rooney switched roles.

Perhaps he finds chances to impose himself on the biggest matches limited because as he’s grown into such a fantastic player, his role has become less defined. Over their recent Clasico binge Mourinho favoured a 4-2-3-1 or 4-3-3 formation with Ronaldo alternatively being charged with creating, or finishing – but never starting in the same “position”. He is the utility forward, told to “make stuff happen”. While Gonzalo Higuain and now Karim Benzema have been effective playing alongside Ronaldo, it appears as if his presence so dominates the front half that other forwards are either overshadowed or are forced to get out of his way.

In simple terms, it seems as if other players share the game with Messi. With Ronaldo’s combination of physical and mental gifts, it seems it’s his game and he lets you join in. Sometimes. This is ultimately frustrating for such a player – Michael Jordan went through the same process in Chicago – but rewarding. For the moment, Lionel Messi’s ability to blend with all types and impose his will without dominating others makes him an irresistible choice as “World’s Best”. It may be a matter only of circumstance that denies Ronaldo his claim at that title. Or it could be that his game evolved so much he won’t approach that level until used in a definite position which matches his unmatched skill-set.

For more analysis and opinion, shoot across to Balanced Sports.